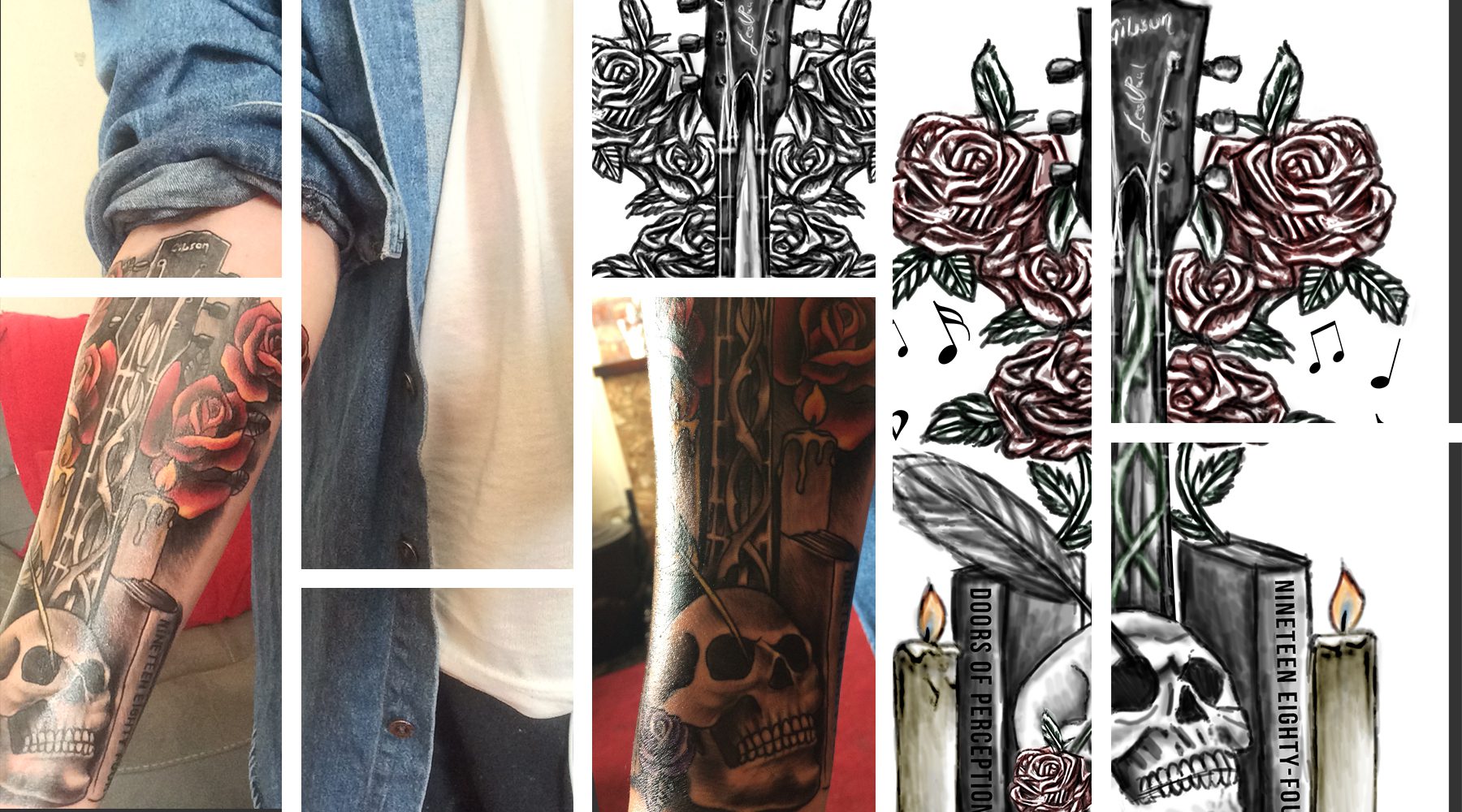 George came across CTD when he was looking at custom tattoos online. Though he didn’t know what kind of design he wanted, he did know that he wanted a tattoo of some kind, “At that stage I had no idea what I was even looking for but thankfully stumbled upon CTD, and my initial impression was that this site looks fairly professional”. The idea that he could get a design made solely and uniquely for him by a professional artist outside of a tattoo shop intrigued him enough to reach out, “Within the next five minutes I had a rough idea of what I wanted, and contacted CTD. The staff were extremely courteous and welcomed such a feral concept”.

When he started connecting with CTD, George was hesitant because he wasn’t sure how he could translate his rough beginnings of an idea into a workable design, “At this stage I had a very raw concept in my mind and was a little apprehensive at first, because I thought to myself, ‘how will I be able to convey such a vague impression which I had just conceived?’” He got in touch with CTD staff member Geoff who assured him that his design concept was more than doable, “I felt reassured by Geoff that my initial idea would not only be workable, but rendered professionally by their artist”. It was that initial experience with Geoff that convinced George to work with CTD, “I thought to myself, ‘here is a person who takes considerable pride in his position and is so personally invested in his work’. Such an experience was quite refreshing to say the least”.

The road to getting his design started the very next day upon contact with his artist, Victoria “The process began by Victoria asking me a series of short and concise questions regarding the layout of the design, dimensions, color contrast, etc.” He didn’t have to wait long to see it starting to come together, “…within 24 hours, Victoria had sketched out the first draft…The first draft had everything I had requested and more. I was blown away by how close she had gotten to the image I had in my mind, although if I am being completely honest, it far exceeded anything I could have imagined”. He originally wanted the design to be done in black and white, but that changed when he saw what Victoria had come up with “…after having seen the first draft I felt it required color to capture the essence of what the concept was about, and also felt that the use of color would add significant depth and character to the image”.

Draft number two saw more details added, “The concept was now alive and so full of vitality with the expertly chosen color contrast and I felt a little overwhelmed with such share amazement and gratitude”. That being said, the tattoo design was still lacking something that George couldn’t quite place, so he asked Victoria for her input. She “not only accepted my concern, but provided me with some invaluable insight. She began to expand the concept to incorporate some elements she felt would compliment the design and enrich its character”. This included things like “adding a rose in the bottom corner of the skull to symbolize the the transient contrast of life and death. A quill to convey my affection for writing and some rose vines to be incorporated into the fretboard and some musical notes”. One more adjustment later, the design was complete, “The third and final draft had all of the elements depicted, and I was yet again blown away by the sheer magnitude of her insight. It was perfect. I am so grateful for Victoria’s input because it made the design so much more compelling and striking. I approved it immediately”.

From start to finish, communication with an artist for a custom tattoo design is key, and George couldn’t be happier with his pairing to Victoria:

She was completely onboard with the concept from the get go. I admire her patience and ability to listen, as well as her acceptance of criticism. I got the impression that she is an extremely intuitive individual whom exudes such profound passion for her work…Her insight and gentle guidance instilled a level of respect for her within me that I hold for very few people. Her genius is immeasurable and I am so grateful for the opportunity to have worked with such a talented and imaginative individual.

Armed with a design that he was happy with, and more than a little excited about, George was then on the hunt for a tattoo parlor to complete the final step in his tattoo journey – getting it inked.

The decision to go custom comes down to personal preference, and whether or not you want that tattoo to be particularly meaningful to you. For George, it came down to expression, “I feel that a tattoo is a very intimate expression of artistic sentiment. It has to have meaning…A tattoo is indelibly imprinted on your personal canvas and I believe such a decision requires considerable foresight and responsibility. A tattoo is like a mirror, it is a personal reflection of what you are about”. Though he has several tattoos already, all with meaning and personal significance, “none of them can compete with my most recent piece”.

In terms of his experience using CTD versus going to a tattoo shop for his design, he describes it as “very rewarding…it differs in the sense that you actually have the ability to design your own tattoo, as opposed to relying on the tattoo artist to design it for you”. Using a service like CTD isn’t fundamentally different than going to a tattoo parlor, but “I didn’t derive as much pleasure from previous experiences as I have with CTD”. The lack of personal interaction that comes with using a tattoo shop is one thing that George says can take away from the overall experience, “whereas actually having to interact with an artist from CTD permits you to have a lot more control and you feel as though you are part of the process”. Having complete control over the outcome of your tattoo can be hugely rewarding and makes your custom designs that much more meaningful.

Inspiration for the Design

Music plays a big role in George’s life, and has since he was young, “From a young age, I found music to be both cathartic and visceral. When I was around seven I began trumpet lessons with my local brass band and from there progressed to learning percussion for three years”. He taught himself how to play guitar at the age of sixteen, and the more he learned to play, the more his passion for music grew, “The process was slow and often frustrating, but as I progressed so too did my passion for it…I have so much more to learn as I feel music is a continuous learning process”. An affinity for music runs in George’s family, as he explains that “I derive a lot of inspiration from my older brother who is a classically trained musician and sergeant in the Irish Army Band. He plays the french horn. From a young age I have always tried to emulate him”.

When it came time to come up with an idea for a tattoo, George looked to his love of the subject for inspiration. The tattoo design doesn’t just include his passion for music, but also for writing and literature, “I wanted a design that could incorporate both whilst at the same time being unique and hybrid. I feel I have accomplished that. The candles denote the passage of time and the roses symbolize the beauty of nature which we are often too preoccupied to notice”.

George took his custom design to B.G Inkfluence in Cork City, Ireland to get inked. His piece was done by Stan, who George says had no issue tattooing a design that he brought in himself, “He appeared indifferent to the prospect of having to utilize someone else work to be honest…The guy is a true professional and able to adapt very quickly to any circumstance”. The final result is a full color tattoo that George had a hand in designing specifically for him, and works as an expression of his own personal interests and passions.

Getting exactly what you want, with zero fuss or hassle, is essential when it comes to custom tattoos. Communicating with your artist and feeling comfortable asking for adjustments to each draft – and having the opportunity to have multiple drafts – ensures that you’re happy with the progress every step of the way, and guarantees that you’ll love the final result.

Are you looking to get a custom tattoo designed? Contact us today!