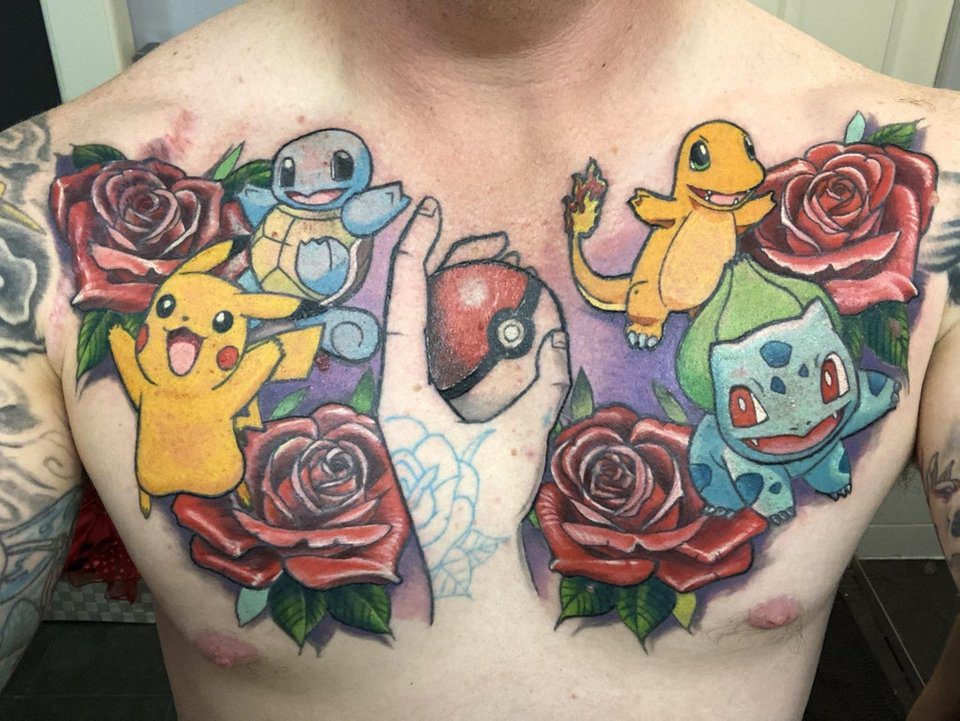 Anime has come a long way since it first made its way to the West from Japan. From Manga comics, to TV series, to major motion pictures, anime culture has had quite an impact on the way we view animated content and what such stories can be told using this medium. When it comes to showing your love of this genre of storytelling, tattoos can be a great way to go. We’re helping you get some inspiration if you’re on the hunt for anime tattoo ideas, so buckle up and get ready for a ton of ideas that could make your perfect anime tattoo design.

The 1989 coming-of-age story about a 13-year-old girl is a worldwide phenomenon for anime fans. It’s a heartwarming story about a girl who’s learning how to provide for herself while also figuring out her own self-identity, and it’s international fandom has a diehard love for Kiki and her pals. Tattoo ideas for Kiki’s Delivery Service are plentiful, including things like:

You can incorporate any of these ideas into a unique tattoo design that fits exactly what you’re looking for in an anime fan tattoo, specifically one that’s dedicated to this anime classic.

Ponyo is the Little Mermaid-esque story of a goldfish princess who yearns to become human after she ventures onto land and falls in love with a young boy, with potentially disastrous consequences. You could use quite a few things for tattoo ideas that are dedicated to this anime feature film, such as:

Get creative with your Ponyo tattoo ideas and try to include elements from the movie into a design that offers a subtle nod to this anime favorite.

Princess Mononoke is an internationally beloved feature film that explores the concepts of the human impact on nature and animals. The ideas behind this movie are just as relevant now as they were when the film was first release in 1999. Fans of this anime feature have a lot of options to choose from for Princess Mononoke tattoo ideas, such as:

Using any one of these concepts to create a tattoo idea that acts as a ode to Princess Mononoke guarantees you’ll get a one of a kind anime tattoo design.

One of the most popular anime TV series internationally, Sailor Moon has capturing hearts and inspiring girls to become evil fighting ass kickers since the early 1990s. There are a huge variety of Sailor Moon tattoo ideas available to you if this is the route you’re looking to go with your latest tattoo, some of which could be:

There are a ton of opportunities to get creative and incorporate some of the many symbols from the anime series into a killer tattoo design.

My Neighbor Totoro is an anime classic from the late 1980s about a little girl and her sister who befriend a group of woodland spirits near their new home in the forest. There are a number of loveable characters in this movie which can make things a little easier in coming up with a tattoo idea. Some potential tattoo ideas for this anime feature include:

There are lots of possibilities for stellar tattoo ideas that pay tribute to this animated film, simply choose your favorite aspect from it and go from there.

One of many Studio Ghibli favorites, Spirited Away tells the story of a little girl whose family comes across an amusement park inhabited by spirits. After her parents are turned into pigs, Chihiro has to work at the park to free herself and her parents from the spirits’ grasp. There are a lot of ideas to work with if you’re looking for Spirited Away tattoo ideas, such as:

There’s no shortage of tattoo ideas for Spirited Away, as it has a ton of memorable characters that can be used for inspiration.

This anime series originally aired from 1989 to the mid 1990s, but it’s just as popular now as it was then. The show focuses on a boy named Goku and his team of Z Warriors as they maintain the fight between good and evil. In terms of tattoo ideas dedicated to the show, there are a few options, such as:

If you’re a fan of this legendary anime series, you have quite a few options to choose from if you’re looking for tattoo ideas.

Possibly the most recognizable and well-known anime show, Pokémon is on the radar of everyone from die-hard fans of the genre to people who have never seen an anime cartoon in their lives. It’s a video game, a card game, a television series, an interactive phone app, each featuring animal creatures that range from cute and cuddly to ugly and terrifying, all which of which are capable of kicking some serious ass. There’s a huge number of options available if you’re looking for Pokémon tattoo ideas, like:

The sheer number of characters alone offers a ton of potential ideas, so there’s no shortage of tattoo ideas to choose from when it comes to this anime favorite.

The Death Note anime series offers a lot of opportunity if you’re looking to combine anime and horror in a tattoo. The dark themes of the story lend themselves to tattoos of a similar nature, so if you love anime and want to go this route with a design, Death Note could be your perfect match. Some potential tattoo ideas include:

You aren’t limited to the television series either, you can take inspiration from the Death Note manga comics, games or feature film as well.

A series focused on two brothers who obtain the power of alchemy, the story follows them as they search for the Philosopher’s Stone to heal themselves after a ritual goes wrong. There are a lot of symbols used in the series that can make great tattoo designs, plus a variety of other potential tattoo ideas, such as:

You could also combine any number of these ideas to come up with wholly unique tattoo design that’s dedicated to Fullmetal Alchemist and your favorite elements of the series.

No matter which anime series or movie is your favorite, there are a variety ways to incorporate them into a unique tattoo design. If you love anime but you don’t know where to start in coming up with tattoo idea, consider starting with your favorite character and going from there. Features like the Studio Ghibli universe offer a ton of different characters that can be used in a single design, so don’t hold back with your creativity here. Combine any and all of your ideas until you settle on a tattoo design you love.