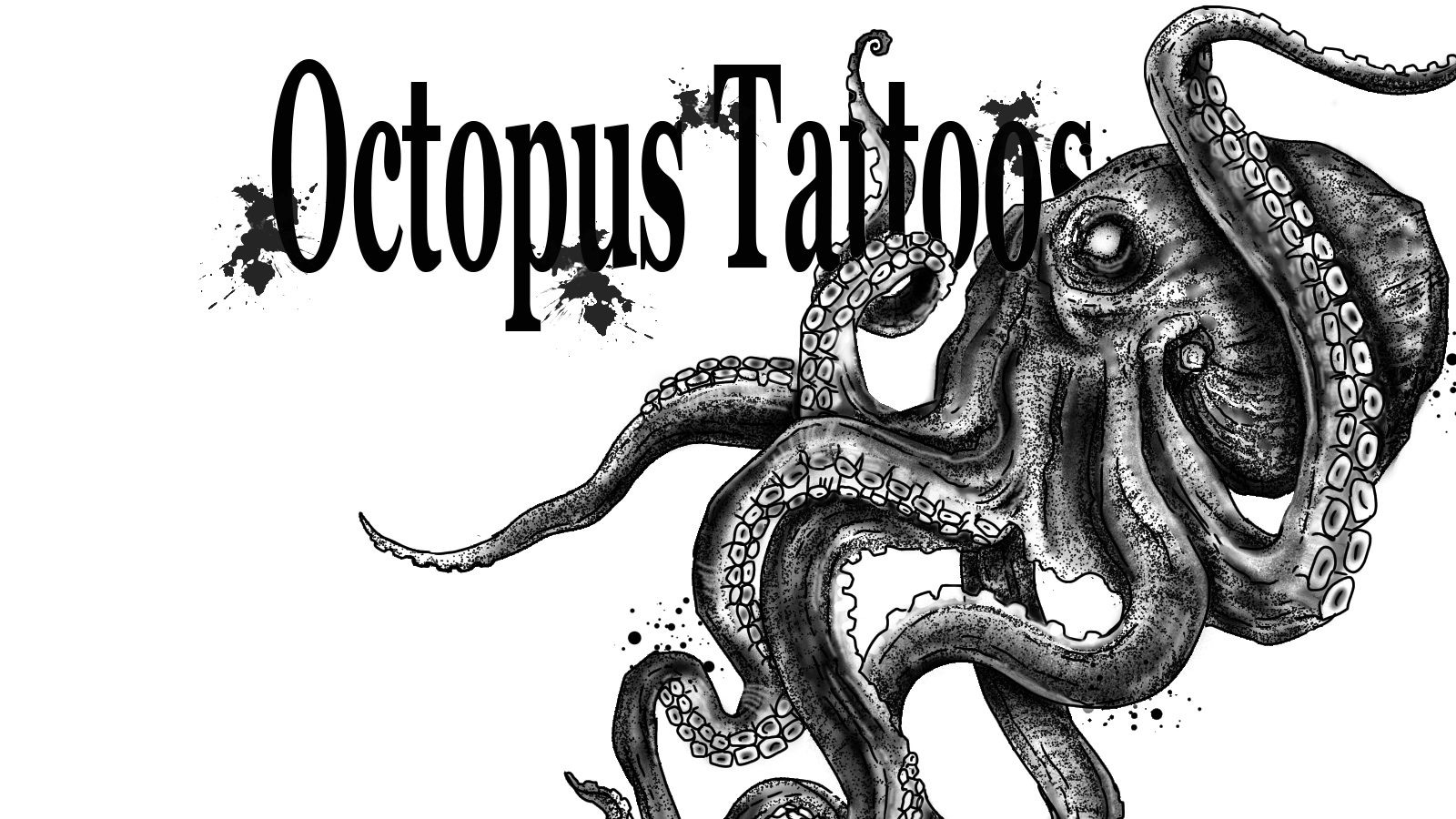 Octopus tattoos symbolize fear, mystery, and danger in the legends. Whether they are brightly colored or black and white, they instill a sense of fear in others. The good thing is that octopus tattoos allow you to get them inked on your hand, back, and chest in various colors and designs.

For some people, tattoos depict their personality. If you want to be unique, you can opt for a colorful yet venomous octopus tattoo. Similarly, you can also get Squidward from SpongeBob SquarePants inked on your body to portray your fun side.

Undoubtedly, an octopus is a fascinating, dangerous, and detailed animal. So, getting them tattooed on your body is, so far, one of the coolest ideas today!

Don’t feel like reading? Scroll down and look at some images for octopus design inspiration

First comes all the pre-tattoo preparations. If you have finalized the correct type of octopus tattoo design in your mind, the next step is to decide where you want to place it. Is it your neck, back, or arm?

To help you make the right decision, here are the best locations for octopus tattoos:

Tattoos are meant to be seen, right? So if you want an easily noticeable tattoo, the forearm octopus tattoo is the ideal option. Such forearm tattoos help you show off your new adventure to the world.

The design and color of the tattoo depend on your choice, so go for a bright-colored tattoo or a minimal one – it’s all on you.

The back is another fantastic place to have an octopus tattoo. If you want a tattoo that is not too visible but still there, getting octopus tattoos on the back is the most suitable place.

If you’re looking for your own octopus tattoo, our team of designers is ready to help bring your tattoo ideas to life.

The shoulder is the ideal placement for an octopus tattoo as it enables the tattoo artist to go for as detailed as possible. It also has a low pain level, so you are less likely to face much discomfort.

The shoulder is also the perfect location for people who don’t want to make their tattoo too visible. The most remarkable thing about this tattoo is that it seems like the animal has wrapped its arms around your shoulder while its tentacles go down your arm or continue toward your chest. This means the tattoo’s size does not restrict you at all.

As intimidating as octopus is, it should be at the forefront, no? That’s when you can get an octopus tattoo on your chest and show the world your inner dark side. Of course, there is no second opinion about the mysteriousness of an octopus, so a detailed black and white tattoo on your chest would hit right at the spot!

An octopus tattoo on hand looks rebellious and striking at the same time. But, contrary to popular belief, octopus tattoos on hands aren’t only limited to delinquents. Instead, they are now a modern trend that allows you to show off your mysterious, dark tattoo to everyone proudly.

Usually, the octopus’ tentacles run down the fingers. So when you move your fingers, it looks like the octopus is in motion. Cool, no?

So if you’re going for the hand tattoo, remember that it will hurt a lot as your hands have thin skin. Also, the color is more likely to fade due to constant exposure. 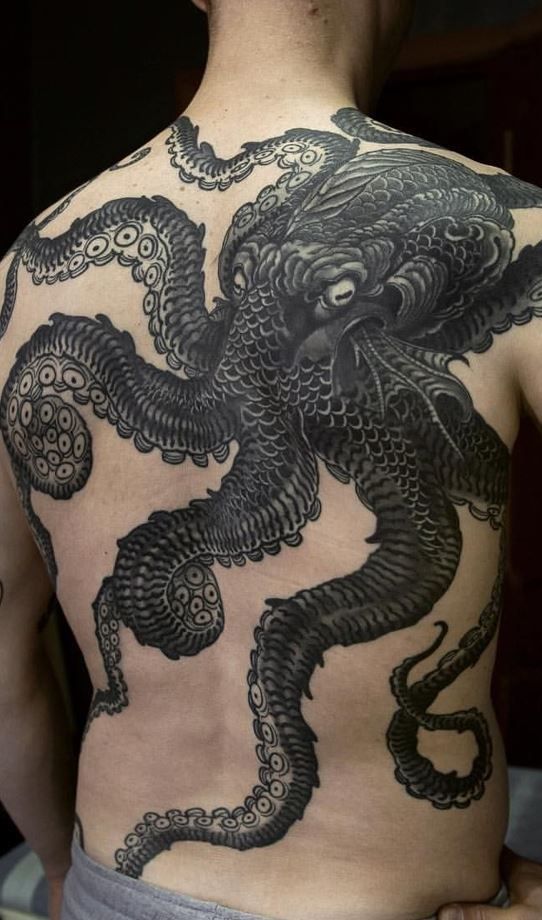 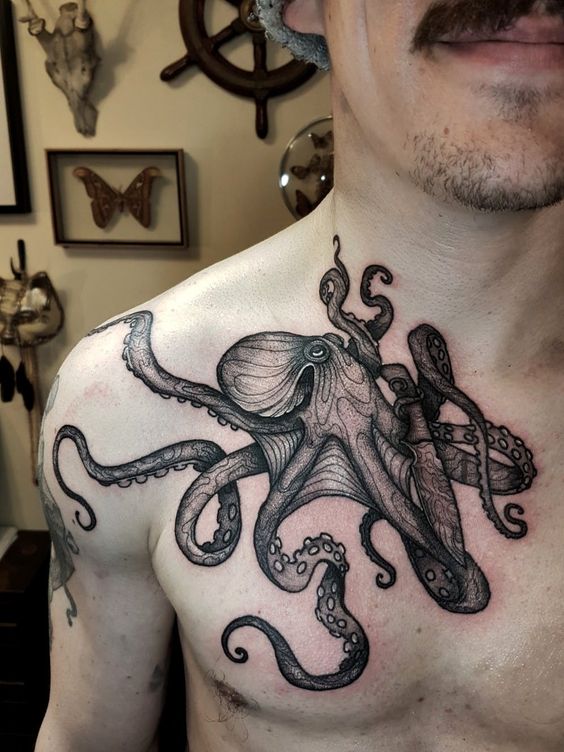 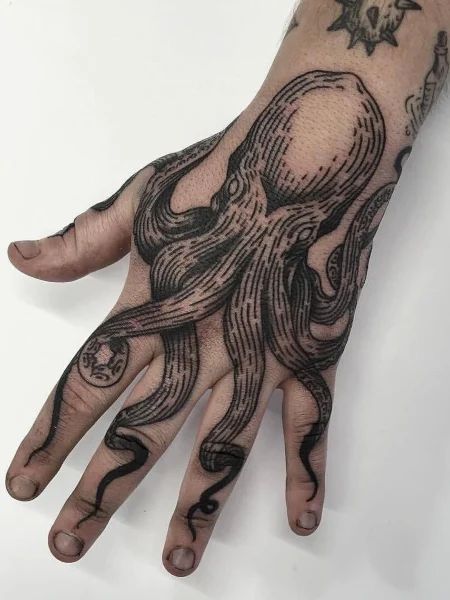 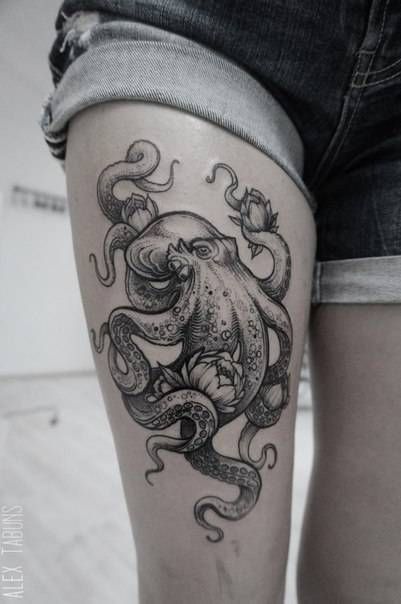 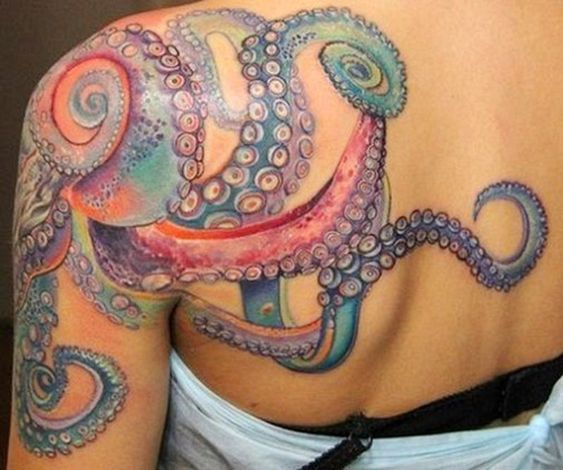 Once you have picked the right location for your octopus tattoo, choosing the ideal design and color is the next step. If you don’t know, you can get an octopus tattoo in various geometric designs and colors inspired by different traditions.

Octopus With an Anchor

Octopus used to be an eight-legged monster in folklore tales that needed to be feared and avoided. It is still a common belief that sailors or anyone at sea fear the octopus. So, the best combination is adding an anchor to this mythical monster.

While the octopus depicts intelligence, mystery, and deception, the anchor represents resilience, stability, and power. Thus, both fit best together and make an interesting tattoo.

If you want a tattoo that keeps you calm yet reminds you of the uncertainties and dangers of life, an octopus with an anchor is the best theme for you. No matter what color or size, or placement you choose, this gorgeous design will uplift your personality anyway.

An octopus tattooed as a skull gives off mysterious and intimidating vibes that remind people of death and danger. So if you want to add a cool yet thoughtful tattoo on your body, an octopus and skull are the perfect combinations.

Although the octopus itself is considered a monster associated with death, it also depicts rebirth and renewal. When combined with a human skull, it portrays intelligence and life cycle. Skull itself is also seen as a death symbol, but some people also see it as a way to overcome hardships in life.

This theme shows that you’re not afraid of what’s to come and are prepared to tackle everything bravely. So, it’s better not to mess with you.

Polynesian tattoos have a deep meaning that goes beyond their beauty. They depict social hierarchy, so many people get Polynesian octopus tattoos to honor their culture. However, some also find it an offense. So, it all comes down to your preference whether or not you want to get it done.

If you’re convinced by its gorgeous detail and intricate design, there is no doubt that it is the best decision you’ve made. A Polynesian octopus tattoo also represents personal strength, growth, and adaptability.

Since this design is super detailed and complicated, it’s better to ink it across your chest, thigh, back, or upper arm.

Yes, an elephant octopus tattoo does sound like a bizarre combination but think about it like this. Elephants are one of the biggest living beings in the world. On the other hand, octopuses are sea-dwelling creatures that are mysterious and dangerous. When both are combined, the tattoo depicts strength and rebirth.

This design consists of an elephant head with octopus tentacles instead of legs. Both animals are highly-adaptable, so getting this tattoo inked on your body would be a great way to show it.

If you’re willing to add a fun touch, you can also opt for a Dumbo head, a Walt Disney character.

If you’re looking for your own octopus tattoo, our team of designers is ready to help bring your tattoo ideas to life.

With so many different designs and shapes to choose from, octopus tattoos also give you the freedom to use as many colors as you want. Are you in the mood for a red octopus? You can have it. What about a blue octopus with a hint of aqua green? Sounds cool. Want a pink octopus with purple tentacles? The tattoo will look cute yet striking!

If you want to symbolize danger and illusion with your tattoo, getting a red octopus with hints of black is the best option. The red color is quite bold, which warns the enemies to back off and think twice before messing with you.

Remember that octopus has sharp peaks that enable it to bite and spit venom on the predators. So, what’s better than highlighting these peaks with a red hyper-realistic design? Believe us, nothing is.

If you’re a beginner and are a bit scared of getting your first ink, a small octopus won’t harm you at all. It would be less painful and cheaper, so you won’t regret getting it soon.

Also, since your tattoo artist won’t have enough room to add too much detail or color to the octopus, you’ll have a timeless tattoo that looks good all the time.

Japanese tattoos include a variety of colors that beautifully blend. You will be surprised at how well the black and gray mix with the vibrant blue and pink. Japanese culture usually includes octopus tattoos in designs like koi fish, lotus flower, or dragons, but you can also go for any of your choices.

Octopus tattoos have a deep history in Japanese culture as they relate to a mythical legend of the Akkorokamui. It is a sea monster that people respect and fear as it has healing and harmful characteristics for humankind.

A Japanese octopus tattoo depicts the combination of good and evil, harmless and harmful, and kind and dangerous. It’s a thoughtful tattoo that you should get on your body.

Watercolor tattoos are rapidly making their place in the industry due to their bright and attractive color combinations. The technique is the same as the canvas; blend different colors and create an aesthetic piece of art. It’s also a key element in the trash polka style though usually done in red. You can use the trash polka style to create a more aggressive octopus tattoo.

An octopus tattoo is much messier than the traditional one and often has no outlines or borders. Such tattoos depict your fun yet dangerous side and are an excellent laid-back option.

Although watercolor octopus tattoos look cool, they are more prone to fade faster and are difficult to touch up. But, of course, that’s not a reason big enough to deter you from getting them, right?

As octopus squirt venom, the tattoo shows that it is instead releasing the ink. Octopuses usually do this to run from their predators, so the tattoo will show that you’re not in the mood for a fight and just want an escape.

The Kraken is a mighty beast in the sea that the sea dwellers fear encountering. It was an eight-legged monster that was powerful and could regenerate anytime. Not only that but the Kraken was believed to attack the ships and make them sink.

An octopus and a ship make a meaningful, mysterious, and fascinating tattoo. The best design is to show that the octopus is holding the ship with its tentacles from below. This depicts that you’re ready to face every challenge that comes your way.

You can also get an interesting quote inked above or below your tattoo to add more details. 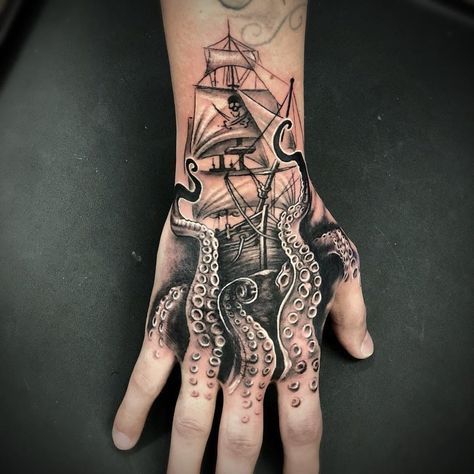 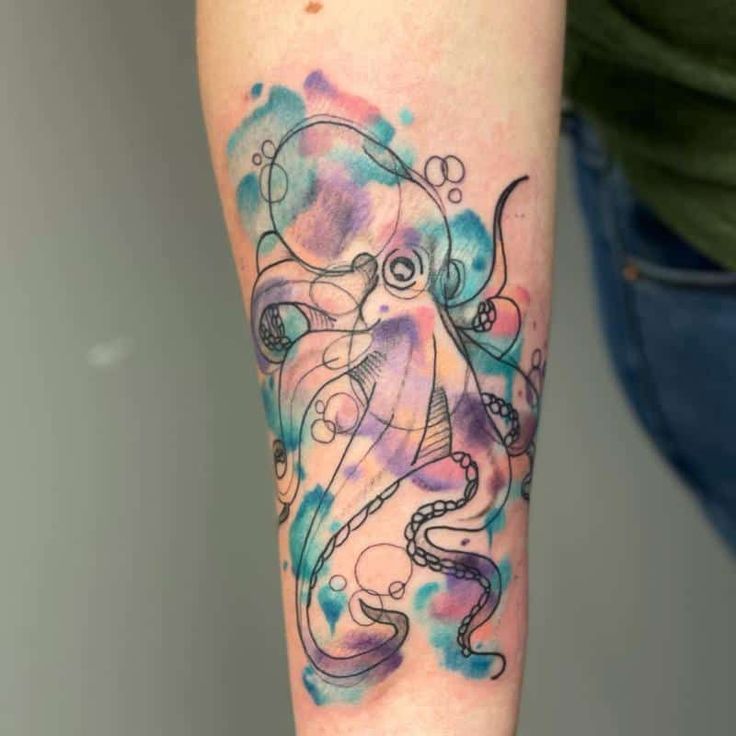 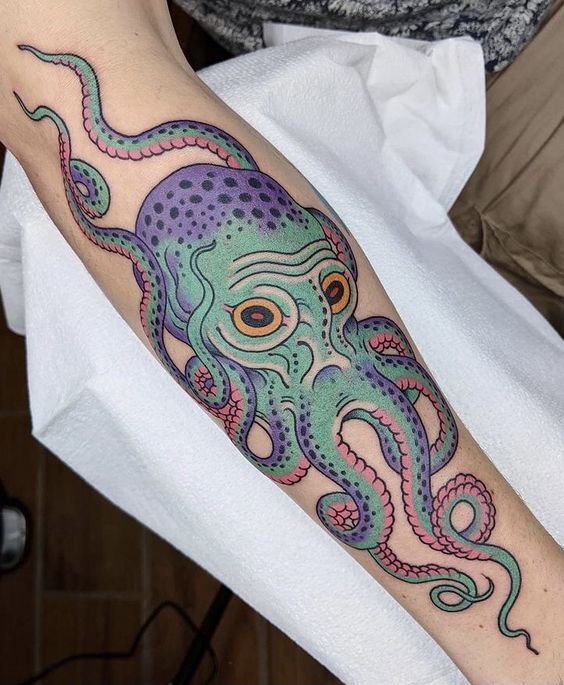 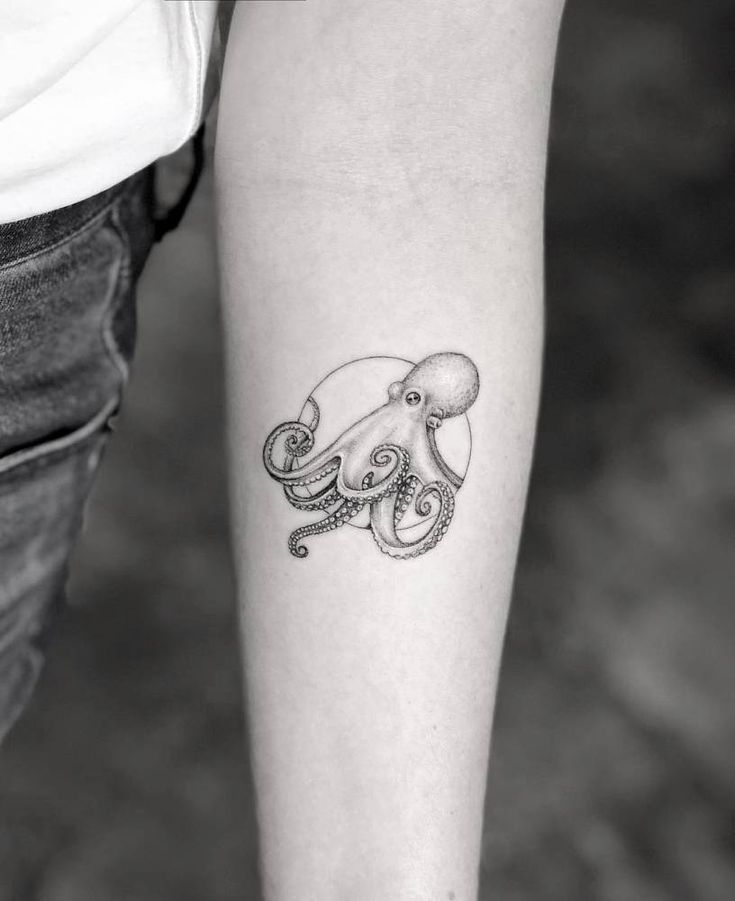 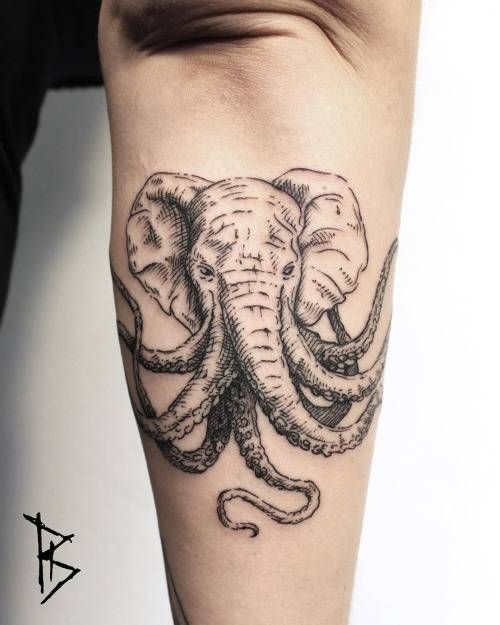 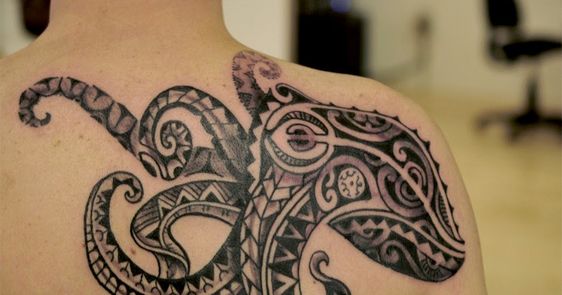 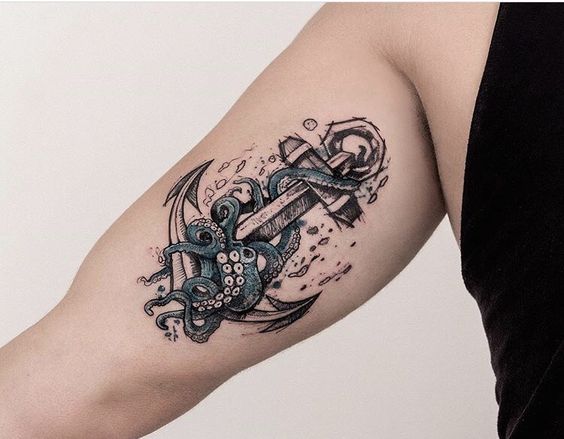 How to Get the Perfect Octopus Tattoo?

The various types of octopus tattoos may have confused you a lot. So, how can you choose the best octopus tattoo that not only looks good on your body but also depicts your personality?
Here are some factors to consider while choosing the perfect octopus tattoo:

Now, you know the best locations, designs, and tips for getting an octopus tattoo. All that’s left is to find the right tattoo artist who can flawlessly turn your imagination into reality. A quality tattoo artist listens to your wishes, makes you feel relaxed, and inks the most accurate tattoo on your desired location.