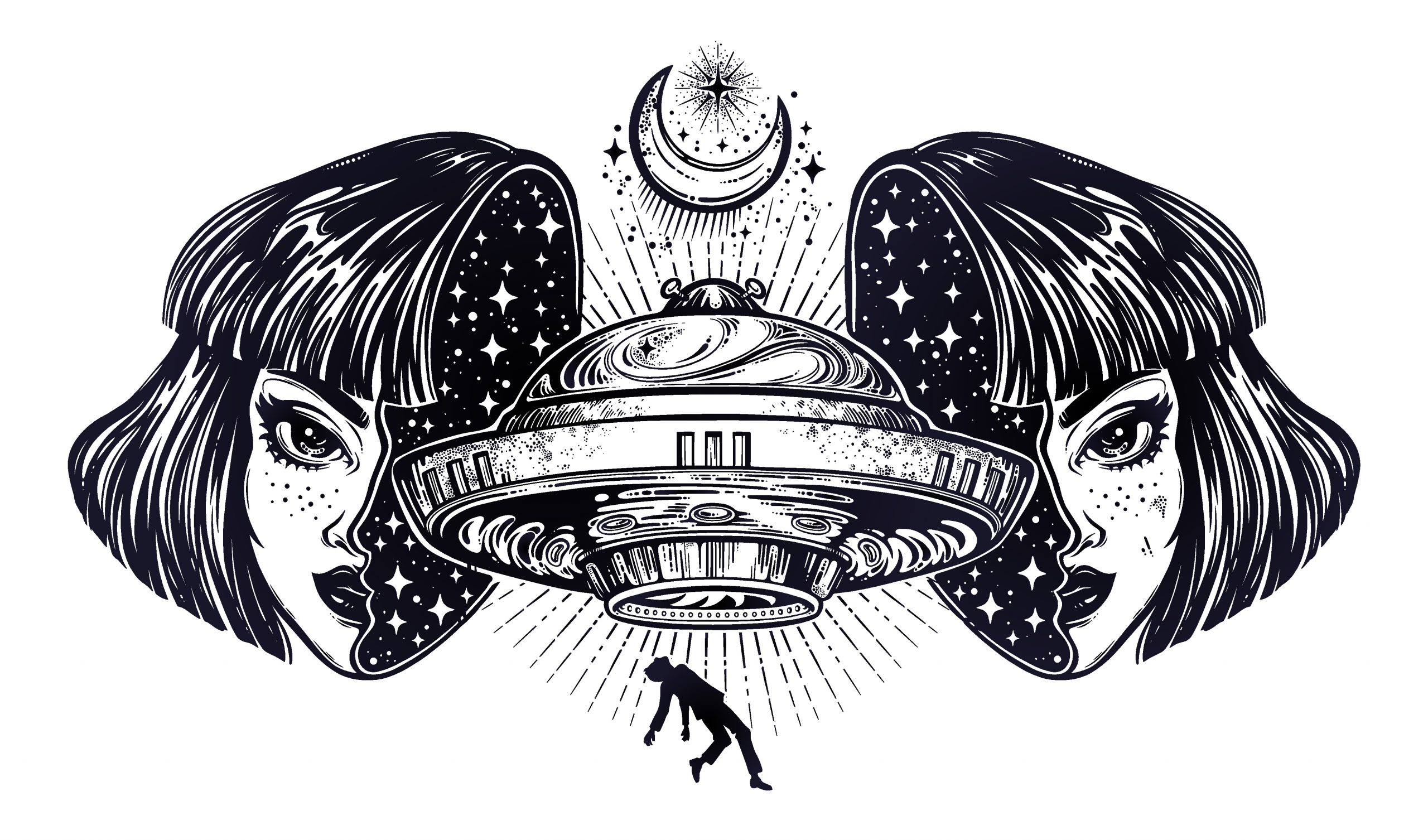 Space – the final frontier. It’s the largest and most vast entity in the universe, which means it holds a ton of mystery that we’ll never fully understand. One thing we can understand, however, is how awesome elements from space look as a tattoo. Space tattoos are hugely popular, and not just one genre of them. There are all kinds of options you can choose from when it comes to space tattoos, which is why we looked into some of the different elements in space to help you decide on the best design choice for your ink. Read on to find out more about some of the meanings behind different kinds of space tattoos.

A constellation is a grouping of stars that form a mythological pattern or image. There are 88 distinct constellations in the sky, 12 of which are the horoscopes we’re all familiar with, so you have a ton of options to choose from if you’re looking to get this kind of design for your space tattoo. Zodiac signs, aka horoscopes, are the most common design choice for constellation tattoos, because the meanings behind these celestial patterns are widely known. People identify with their star signs and what they represent, and often want to rep that with a tattoo.

You’re likely familiar with some of the other constellations as well. The Big Dipper, for one, is part of the Ursa Major constellation. Chances are you’ve also heard of Orion and his belt. All of these star patterns form a fixed path, or ecliptic, between the sun, moon and the planets, through which the rest of the galaxy wanders while these constellations remain the same. Constellations make awesome space tattoos because they can be symbolic of any number of the meanings that are attributed to the personas for which they’re named after, and are the perfect choice for a more minimalist tattoo design approach.

Star tattoos have a ton of different meanings depending on what the design and context of the tattoo is. A bold, five-pointed star with shading on half of each point is the nautical star, which represents the US Navy. The design is reminiscent of a compass, an important tool when you’re at sea, which is why a star tattoo can also symbolize finding your way.

Stars can also stand as a symbol for hope, ambition, signifying one’s stardom or success, a particularly bright moment in life, childbirth, religion, or an overall interest in space and astronomy. Space tattoos in the form of stars can be done using any combination of style, colors, or sizes, and can easily be incorporated into an existing tattoo, like filler for sleeve tattoos, for instance. There are endless possibilities and potential meanings when you’re using stars as a design for space tattoos.

The official word is that there are 8 planets in the solar system: Mercury, Venus, Earth, Mars, Jupiter, Saturn, Uranus, and Neptune. Each planet is tied to one of the horoscope constellations, so can be representative of one’s star sign and the meanings associated with them. The planets get their name from the ancient Greek and Roman gods; they were named after whichever god presided over whichever realm a planet represented. Venus, for example, was named after the goddess of love and beauty, and is often associated with women. Mars, on the other hand, is a tumultuous planet, and is named after the Roman god of war. Jupiter, the largest of the planets, was named after the ruler of the gods, who is known as Zeus in ancient Greek mythology (Jupiter, in ancient Roman mythos).

If you have an affinity for ancient Roman mythology, and are interested in space tattoos, then tattoos involving planets could be a great choice. Outside of the mythological meanings, having a planetary tattoo can simply be a way to showcase your love of astronomy with a sweet space tattoo of one or all of the eight planets.

The moon is a very meaningful symbol for space tattoos. The moon and its different forms represent a number of different ideas. Crescent moons are often associated with Wicca, a religion based around witchcraft and paganism, especially the symbol known as the Triple Goddess. This image is a waxing moon, a full moon, and a waning moon all connected side by side, which stand for the Greek goddesses Demeter, Kore-Persephone, and Hecate. These three represent the three major phases in a woman’s life – the Maiden, the Mother, and the Crone. Moon symbols frequently represent a passage of time and changing phases, because of the cyclical nature of the moon itself. There are 8 major moon phases: new, waxing crescent, half, waxing gibbous, full, waning gibbous, waning, and old moons. This is why if you’re looking for a space tattoo design that can be representative of change, growth, or the passage of time, moons can make an excellent choice.

The moon also has a notorious dark side, so there’s a lot of ambiguity when using the moon for a tattoo. Moons can also symbolize lunacy, feminine mystery, magic, fertility, darkness, and Wiccan beliefs. The moon is largely seen as a female symbol, and is astrologically considered to impact the day to day lives and emotions of women on earth.

Believe it or not, the sun holds a lot of meaning in a number of different areas. In Ancient times, for example, the sun symbolized fertility and vitality. In Christianity, the sun is representative of rebirth, strength, power, energy, and life. It has a similar meaning in astrology as well, representing one’s outward personality and energy. It’s said that where the sun is positioned when you’re born determines how you will be as a person in life later on. There are a ton of variations of the sun that you could use to symbolize any of the ideas that resonate with you most, from a full sun with burning flares, to a tribal-inspired sun totem.

The galaxy is vast and mysterious, unknowable and somehow romantic. There are roughly one hundred billion galaxies in the known universe, and the image of any one of them is full of swirling stars. A galaxy can be a great symbol for the unknown or mysterious, chaotic thoughts, or emotional turmoil. The imagery for a galaxy is beautiful, so no matter what meaning you want to attach to it, this is one space tattoo that’s always going to turn out great.

When you think of space, many people automatically think ‘aliens’, so why not include that in the designs for your space tattoos? You have a few different options here: you can go the literal route and get a tattoo pertaining to UFOs or aliens from outer space, or you could get a piece that’s related to the 1979 horror classic, Alien.

The tear-dropped shaped alien head with large eyes is often associated with Area 51, and is considered a symbol for believing in the existence of aliens. If you’re a proud believer and want everyone to know it, then an alien-related space tattoo could be the best choice for you.

We can’t have an article about space tattoos without mentioning Star Wars – space tattoos go hand-in-hand with Star Wars, so it would be a crime if we failed to mention them here. The Star Wars fandom is massive, and there’s no better way to showcase just how much you love something than to sport a tattoo in its honor. You have decades of movie options to choose from, from the classic 1970s originals-slash-sequels, to the latest Disney ventures with Han Solo and the gang. Your choices are practically endless for what kind of design you could get relating to Star Wars, but we recommend taking inspiration from your favorite aspect, character, or part of the series.

Princess Leia, in particular, has become a symbol for a strong female alongside Rosie the Riveter, so if you’re a woman looking for a tattoo that represents female strength but also stays true to your love of the films, then Leia could be the perfect design solution!

There are a ton of different variations of space tattoos out there, the key is to narrow it down to what resonates with you most. You could choose any one of more than 80 constellations, including your zodiac sign, represent the phases of the moon, or show off your love of the Star Wars franchise. Whichever direction you go with your design, space tattoos allow for a ton of creativity, and offer deeper meanings that you may have thought.