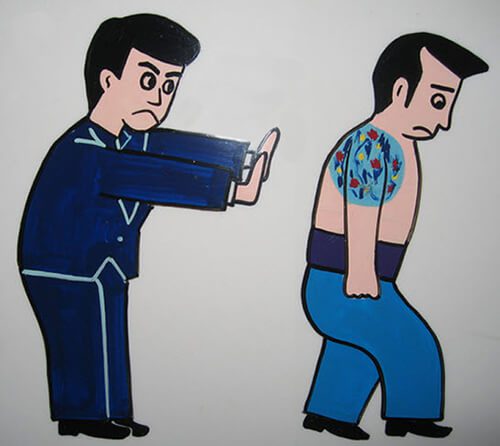 10 Outrageous Tattoo Laws From Around the World

Laws of all kinds differ from country to country worldwide, and the same goes for rules around tattoos. You may not think something as innocent as body art would be so controversial in some areas of the world, but you would be mistaken. We looked into some of the wildest policies that exist around the globe when it comes to tattoos, and ranked them from least to most out-there. Read on to find out which tattoo law wins the award for #1 most outrageous rule.

Don’t plan to extend your sleeve tattoo onto your hand if you’re travelling to Denmark. The country made it illegal in 1966 for tattoo artists to ink the hands, neck, or face. However, it seems as though this law has become more lax in recent decades, as many Danish people do have tattoos in these areas. It’s up to the tattoo artist’s discretion in taking the risk to do the piece, more than anything else, but it wouldn’t be tough to travel to a surrounding country to have the work done either.

North Korea, not surprisingly, has a total ban on tattoos that depict religious iconography. Tattoos in this country are regulated by the North Korean Communist Party, and must be approved before being done in order to avoid persecution.

Thailand might seem like a great place to get a nice Buddha tattoo, but that would be a bad idea. As of 2011, tattoos of the religious icon are strictly forbidden in the country, for both locals and visiting tourists. This law also applies in Sri Lanka.

A number of muslim countries have laws banning tattoos that involve any quotes or imagery from the Quran, Allah, or the Prophet Muhammad. The content of all tattoos in these nations are subject to Sharia Law. These countries include: Malaysia, Saudi Arabia, Yemen, Afghanistan, and Pakistan. So, tattoos aren’t illegal in these countries, but they must be respectful to the local culture and religion.

In the city of Dubai, visible tattoos are illegal, but in most of the country, this rule only applies in sacred or holy areas. Tourists aren’t likely to get in any trouble for getting a tattoo while in the UAE, unless it’s disrespectful of their religion or culture, in which case, you’ll likely be banned from returning.

8. Keep Your Politics to Yourself

A few countries with storied histories of extreme politics have bans on any tattoos that promote right-wing or Fascist political beliefs. In Cuba, for instance, ink that shows any right-wing ‘propaganda’ or religious overtones are banned outright. This policy is the same in China as well. In Germany and France, religious tattoos are no problem, but avoid any ink that shows off your extreme political leanings.

China recently banned tattoos from appearing on television in any way, shape or form. This new law states that tattoos cannot be shown on any actors or performers on screen, and bans ‘hip-hop culture’ from being shown as well.

Tattoo laws in Japan are interesting. Tattoos haven’t been illegal in the country since the late 1800s, but individual stores have widespread bans on customers entering with visible tattoos. It isn’t just stores either – a lot of public areas have a strict ban on visible tattoos from anyone who wants to enter the facility, be it a public pool, sauna, restaurant, or hotel. Make sure you double check your hotel’s tattoo policy if you’re planning a trip to Japan.

6. No Eyes or Sundays

We can’t say we disagree with Georgia state law on eye tattoos, especially in light of the story of a Canadian model whose misery from a botched eyeball tattoo went viral last year. In Georgia, it’s illegal to get or perform tattoos of any kind within an inch of the eye socket, which includes microblading. The strangest law of the state, though, is that tattoo shops are legally forbidden from opening and operating on Sundays.

The city of Adelaide, Australia passed a law making it illegal to own a tattoo shop if you’re associated with any kind of motorcycle gang. This applies whether you’re a member, or if you regularly fraternize with biker gangs. The reasoning here is an attempt at eradicating gang activity, and is one of the 10 that does make some sense.

South Korea has laws that restrict tattooing from being done by anyone except for a licensed doctor. There’s a huge underground tattoo scene in the country because of this, with members of the public seeking out tattoo artists instead of doctors to do their ink. The reasoning behind such laws was to, theoretically, protect the public from potential harm and regulate the industry so as to make it safer. Considering the booming illegal tattoo industry in the country, this may not be entirely successful.

Things aren’t quite so extreme in Hawaii, however, where the law around doctors and tattooing actually makes some sense. In this US state, tattoos anywhere on your eyelids or ears can only be done if overseen by a doctor. In the Midwestern US, though, things get a lot more strict. In the state of Wisconsin, getting a tattoo of any kind is prohibited unless there’s a medical reason behind it.

In Japan, technically, it’s illegal to be tattooed by anyone but a doctor, but apparently, this is not largely enforced.

There’s a lot of misconception about tattoo laws in the United Arab Emirates, with most people believing that tattoos are completely forbidden. This isn’t actually the case. Technically, there is a law under the General Authority of Islamic Affairs and Endowment that requires tattoos to only be done by doctor, because it’s considered a form of self-harm, but it’s apparently not difficult to find tattoo artists in the country.

Ireland’s law on tattooing is one of the more outrageous, in that there isn’t one! There are zero laws or restrictions in the country, so anyone of any age can get inked if they want to. Thankfully, reputable tattoo shops refuse to ink anyone that isn’t at least 16 years old, but it’s 100% up to the shop and tattoo artist’s discretion.

Things are somewhat similar in the Netherlands, where the legal age limit for tattooing is 16, as long as the client has written parental consent. What makes this interesting, however, is the lengths at which tattoo parlors go to cover their asses against potential lawsuits – they keep the written consent on file for a decade, just in case.

It’s officially illegal to get tattooed in Iran, and people who break this law have been arrested and persecuted in various ways, including jail or public parading. Visitors to the country are expected to cover their tattoos, especially if they could be considered offensive to Iranian beliefs.

Turkey is cracking down on citizens who have existing tattoos, urging them to have their ink surgically removed. Tattoos of any kind, including cosmetic, are illegal as of 2015, when the Religious Affairs Directorate passed a fatwa (legal rule) declaring that tattoos go against the Prophet Muhammad, and are not to be allowed.

The Iowa state law on tattooing takes the cake for the weirdest and most outrageous. It is possible to get a tattoo if you’re under the age of 18… but only if you’re married. Not even parental consent can get around that law – you can get inked as a minor only if you’re legally married. But, hey, at least you and your spouse can get an awesome couple tattoo!

There are different laws and policies on tattoos all over the world, and these are just some of the strangest 10 that we’ve come across. Have you heard of a weird tattoo law that we didn’t mention?