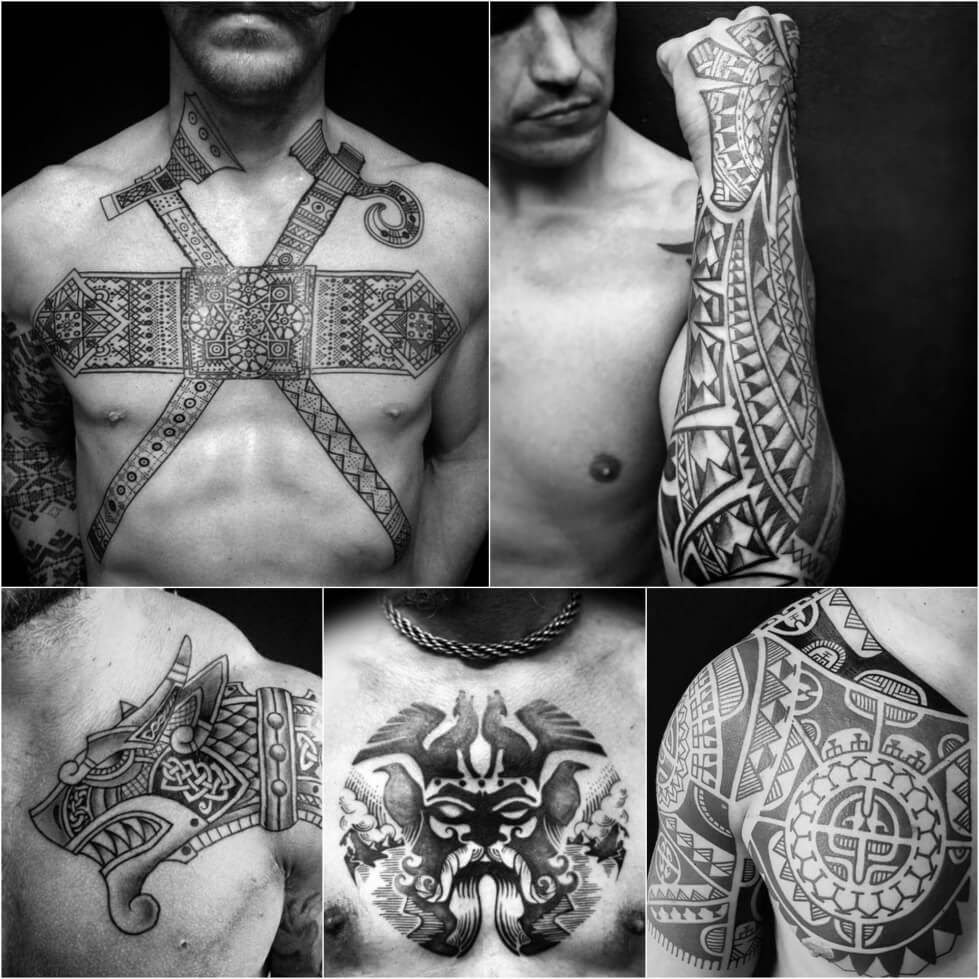 A Look Into Aboriginal Tattoos and What They Mean

Tattoos in Aboriginal culture are extremely meaningful and can be very powerful. It’s one of the oldest art forms in the world, and was first practiced by indigenous people across the globe. We wanted to look into this kind of tattooing to find out more,so we asked Toby Sick’s, Métis tattoo artist and owner of Inkdigenous Tattoo in Toronto, to fill us in on what tattoos mean within Native culture, what some of the more sacred image are, and how to avoid appropriation of such motifs. Read on to find out out more about Aboriginal tattoos.

In indigenous culture, tattoos are more than just body art. They serve a purpose, according to Toby, “it’s a piece of identity for some of us. Sometimes within our community, or within our nation of people, we have specific tattoos that show our purpose in the community. Some of us, we have spirit names and we have clan systems”. There are a ton of different indigenous clans that one could belong to, like Bear Clan, Eagle Clan, Wolf Clan, Turtle Clan – and those are just a few of the many examples. Each group has their own unique symbol that represents them, and someone who’s apart of that clan would have a tattoo that shows what group they belong to, and what their role is within that specific community.

Some tattoo designs mean more than others in Aboriginal culture, but the sacred ones all have meaning and serve a purpose. For instance, “some people get warrior symbols because they’re water protectors, some people get little dots on their chin, or on their eye, or on their ears, or on their forehead, so that symbol is the four directions”. Each nation has their own designated emblems as well, “Some people belong to specific nations of people, like Métis has a Métis symbol, a Mohawk has a Mohawk symbol, there’s a symbol for Anishinaabe, or Thunderbirds. There’re so many different markings for different cultures, like Stolo has different markings, the people from Haida have different markings, so it’s unique to the specific nation of people where it’s centered to…or speaking toward that entity”.

While Toby firmly believes that each and every symbol in Native culture is important, “I love everything that has to do with the indigenous arts culture or spirituality”, there is one thing that resonates with him a little more than others, “the skull in headdress, because it’s my ancestors. I love the skull and headdress… that’s one of the tattoos that means a lot to me, and I take a lot of pride in doing [it]”.

Using motifs from a culture that you are not apart of is a tricky line to walk, because you’re facing the issue of cultural appropriation versus cultural appreciation. That’s not to say that all Native American symbols are off limits for tattoos if you aren’t of the culture, but it’s important to do your research before you request certain images. Getting a sacred symbol like that of a clan or a spirit name is a big no-no, according to Toby:

Designs which Toby says are holistic ones, like a feather or a teepee, or the Grandfather flash that’s on offer at Inkdigenous aren’t an issue, “if you want to admire that teaching, that’s fine…but don’t go out and pretend that you have a spirit name and you went through ceremony and this and that, and that you belong to a certain nation of people when you don’t”.

The Importance of Aboriginal Art Spaces

Providing a space that’s centred around Aboriginal culture is important, not just for tattooing – it helps the community more than you might think. For Toby, while his tattoo shop does provide him with an economic resource for himself to work in the arts, “it’s bigger than that…The reason I opened an all indigenous centered…cultural centre was to create a hub for all indigenous artists”. He uses his shop to help elevate other indigenous artists across Canada by selling their artwork, from paintings to beadwork to animal skulls, which is “all handmade”. He takes pride in offering not only tattoo art that’s not appropriated by artists outside of the culture who don’t know what the designs mean, but he also wants to cultivate discussions that can help the indigenous community at large, “we can get together and figure out: what are we doing for our youths in the arts, how we uplift our youth in the arts, what we can do to help other artists prosper economically within the arts. It’s a place where we can all get together and get more contacts, and create a fun loving, safe atmosphere for all of our artists to be able to prosper within their career, no matter what type of art it is”.

In terms of tattooing and space, places like Inkdigenous offer a safe space for Native Canadians that they might not be able to find in other kinds of tattoo shops or art galleries, “when somebody comes in here, it’s a whole different planet. We feel at home for our people. Because of the minorities that we are in mainstream Canada, and what the social norm has created for us, we can’t get around that… when we go into a different atmosphere which is Eurocentric owned… we feel a little….we get that feeling of inferiority”. A point of contention for Toby is with his smudge bowl. He keeps one at the door, as is customary is Aboriginal culture, but he’s been told by other shop owners that he’s not allowed to do that, “It’s just a…crock of shit. I’m a business owner and I have insurance, and not once has the fire [department], or my insurance, said ‘you can’t have smudging in your shop’. There’s no rule, there’s no law against it. I’ve looked it up, I’ve asked. I called my insurance, I called the fire chief, everything, and they all said I’m allowed to smudge in my shop. The health and safety lady came in…they said I’m allowed to smudge in my shop. So why are these other organizations saying ‘you can’t smudge because it’s against regulations?’” He feels that this comes down to a stigma against his people, “we’re being oppressed by other businesses across Canada, saying that we’re not allowed to smudge because of insurance purposes, which is a crock of shit. We’re being oppressed, because we can’t even practice our own spirituality in our own country”. This is why he offers the practice in his own tattoo parlor, “so when people come… into the shop, they come right to the smudge bowl, they smudge… the music is playing on the speakers – the music is pow-wow music, it’s indigenous music, it’s about our people. They feel right at home”.

Tattoos in Native culture serve a larger purpose than decorating your body, and there are certain designs that shouldn’t be used if you’re not apart of that culture. Unless you belong to a clan or community, and have gone through a specific ceremony to earn your indigenous tattoo, it’s best to steer clear of such motifs. That being said, there are holistic designs that can be adorned to show appreciation of the culture, but it’s important to research the designs you’re looking at getting before booking an appointment. If you want to help support the indigenous art community, seek out tattoo shops and artists who are within the culture to do your ink for you – you might even learn a thing or two.