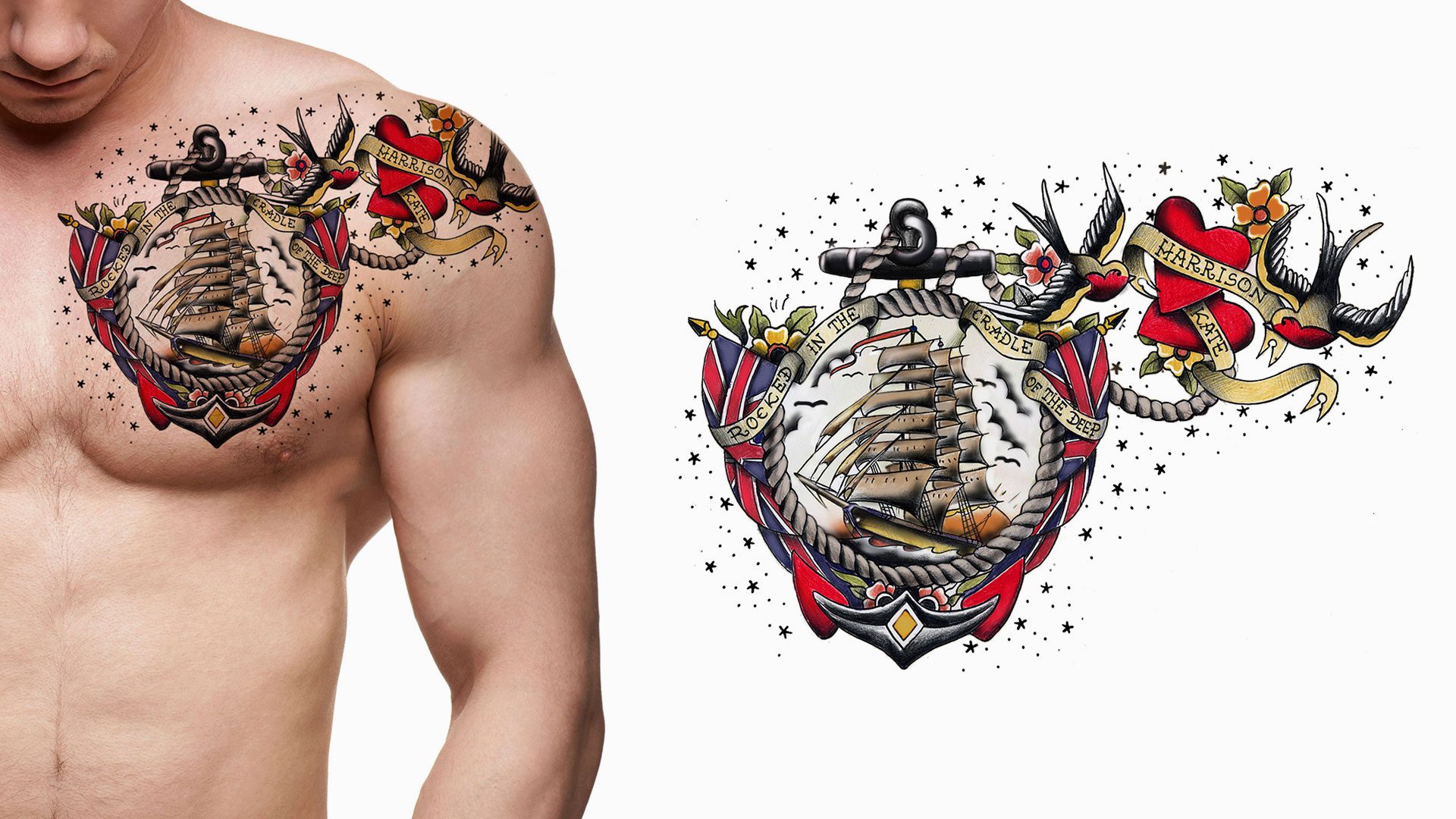 American Traditional tattoos are a hot trend. But these tattoos date back to the 19th century. Two major developments revolutionized the tattoo industry, allowing artists to document and solidify the style. These developments included the invention of the electric tattoo machine in 1891 as well as the distribution of flash sheets which were distributed by mail in addition to residing in portfolios and hanging on the walls of various tattoo parlors.

While the trend began in the 19th century the style truly solidified and found its voice during WWII. Most modern tattoos draw inspiration from this period rather than the earlier one.

In the absence of wildly distributed flash sheets the traditional American tattoo style might have become little more than a series of designs inked on the bodies of a few sailors too transparent for endurance. Thus, we can safely say the style was launched in New York City, by Lew Alberts, and in Detroit, by Percy Waters. As noted in A Short, Incomplete History of American Traditional Tattooing, both men were the primary distributors of mail-order flash sheet catalogs and accompanying articles about the art of tattooing which served to both preserve and promote the style.

If Detroit and New York City may have served as birthplaces, but Honolulu was where this form of tattoo art experienced its Renaissance. This was largely due to the famed “Sailor Jerry” who began inking the soldiers and sailors after the bombing of Pearl Harbor.

Some of the earliest examples of this style included patriotic motifs such as the American Eagle spreading its wings wide behind a red, white, and blue shield, or Lady Liberty carrying an American flag while holding an American shield. Anchors, roses, ships, and swords were also common. The designs were big, bold, simple, and dominated by primary colors, especially red, white, blue, black, green, and gold.

If you’re looking for your own American Traditional tattoo, our team of designers is ready to help bring your tattoo ideas to life.

The Most Common Early American Tattoos and Their Meaning

The most traditional designs had a simple, straightforward, patriotic meaning meant to convey a love for America.

Nautical-themed tattoos might symbolize the sailor’s love of life on the ocean. Some of them also served to showcase the sailor’s experience. However, nautical stars and compasses could express a desire to “stay the course,” as well as a desire to survive and make it home again.

Roses predominate many traditional American tattoos even now. They’re a traditional symbol of love, as are hearts.

Swallows were quite popular as well. Swallows could symbolize freedom, or a sailor’s desire to find his way home.

Anchors were a reminder of all the things that remained constant in a sailor’s life. As the Sailor Jerry website notes, “this is why you’ll often see them emblazoned with ‘Mom’ or the name of the sailor’s sweetheart (the people who keep them grounded).

Sharks were a symbol of courage, power, and ferocity. Other dangerous animals, like snakes and panthers, could represent the soldier or sailor’s ability and willingness to fight. These tattoos often served a very practical function, helping to preserve life and limb by intimidating onlookers to prevent actual fights. Skulls, while similarly intimidating, more often represented a feeling that the wearer had come to terms with the possibility of death and was no longer afraid of it.

Of course, some tattoos had no common symbolism. These would have been chosen just as tattoos are chosen today…either because they meant something specific to the wearer, or because the wearer simply enjoyed them. Pin-up girls, for example, were an extremely popular choice, and served mostly as a form of wearable art that could be enjoyed when access to women was scarce and other forms of art were unavailable.

In the modern era the style has persisted and many people look to design their own American Traditional tattoo, but the subject matter has expanded. It’s not uncommon to see pop culture icons expressed in traditional styles, including references to Star Wars, Star Trek, Disney, and Marvel comics. Banners with specific slogans, often edgier than their early 20th century counterparts, are also quite common.

At times, the images are slightly more morbid or disturbing. A pin-up girl face may show stylized signs of rot, as if the wearer were showcasing a particularly stylish zombie. The simple heart design may be replaced with an anatomically correct heart. Patriotic icons persist, but are at times rendered in a somewhat ironic fashion, reflecting the cynicism and distrust for authority that has persisted since the post-Cold War era.

Swallows, roses, and other early American design choices and themes remain highly popular. There is room for a great deal more creativity and self-expression than ever before, all without breaking or subverting the style.

Why Get an American Traditional Tattoo?

Using the traditional style adds a bold, artistic, and vintage flair to any design you might have in mind, and you don’t have to have a knack for creating them yourself. Custom Tattoo Design will help you create the image that is most representative of the things you are trying to express. Just click here to describe your design and start the process.

Already have an American Traditional tattoo? We’d love to see it! Just snap a photo and share your design with us on Facebook, Twitter, or Instagram. We’re genuine tattoo enthusiasts who enjoy seeing all kinds of ink.