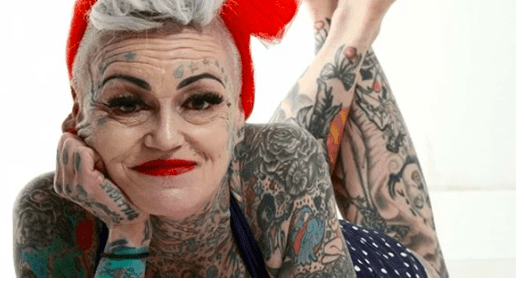 Tattoos For All Ages: Older Folks with Tattoos

There’s No Such Thing As Too Old For Tattoos

Older folks are less likely than younger generations to get flash or one-off tattoos. The decision to be tattooed isn’t taken lightly for more mature people, and their design choices tend to be more meaningful and thought out than a spur of the moment decision.

Becky got her first and only tattoo on her 60th birthday. As a gift from her daughter, Liz, the two of them got matching tattoos done, the design being something she and Liz used to draw when her daughter was a little girl, “she and I drew each other as “heart head girls”. It was one of the many special ways we communicated with each other”. They took their drawings to a couple of local artists to have it done, and were thrilled with their results, “I deeply cherish the tattoo I have of Liz on my foot”.

As far as how people respond to her having a tattoo, “Many people express surprise when they see the tattoo on my foot” but she hasn’t experienced any negative reactions to her ink. She’s also not the only one who thinks tattoos are for everyone, “I live in Austin, TX where many women of all ages have some large and gorgeous tattoos”.

Pamela’s first got inked when she was 40, and at 57 she’s since added 3 more to her collection. Her first tattoo, a cross, acts as a symbol of her faith. Once she got that one done, she was hooked.

Pamela’s first got inked when she was 40, and at 57 she’s since added 3 more to her collection. Her first tattoo, a cross, acts as a symbol of her faith. Once she got that one done, she was hooked.

“After that, my daughter and I got matching tattoos, [which] she paid for”. Matching tattoos with their children is a common theme for older folks getting tattooed, making the experience that much more meaningful.

Pamela’s next tattoo was also a matching one, “I got one that matched with my best friend when I moved away from Calgary to Victoria”. Her latest one is all for her, “I got one to remind me to never give up, as I live with Chronic Pain and Chronic Fatigue”. This tattoo acts as a symbol to remind her of her strength and perseverance, even when it gets tough because of illness.

Deedee, a mom of 3, grandmother to 8, and at age 52 has a number of tattoos. Her first foray into tattoos happened when she was 40, and she steadily added more over the course of that decade. She had concerns about how visible her tattoos might affect her working life, “The tattoos were hidden due to the fact that I worried about how I was viewed in that corporate environment, but I had a feeling they would not be allowed. Sure enough, another woman in the department was reprimanded and told skirts or pants longer than the tattoo must be worn in order to cover it up”. Since leaving that job, she’s added more visible pieces, one of which is a matching piece with her daughter.

While she prefers to keep her tattoos hidden during professional duties, when they are visible the responses she gets are generally positive, “I now work as a sorority house mom and keep them hidden during interviews and special events, however the girls usually find out I have them and think it is ‘cool’…People are surprised to see them, especially on me being a rather reserved and well-presented individual”. Yet another example of why you can’t judge someone’s character based on the fact that they have body ink. And if she does feel like she’s being judged based on her tattoos? “I honestly do not care”.

Depending on the age of the person that’s getting tattooed, there are some extra considerations that need to be taken. For people over 65, for instance, there’s a concern for skin thinness and how the ink will hold. To get around this, artists are encouraged to use a lighter touch with the needle to prevent blowouts and making the design look smudged. It’s easier for the tattoo ink to penetrate deeper layers of the skin when it’s thinner and more mature, so it should be treated, as one artist put it, “like tissue paper”.

It’s also important to keep in mind that older clients may be on different kinds of medications for things like diabetes, heart issues, or blood thinners. These drugs can cause more bleeding, so if you’re an older person wanting to get inked or an artist with an older client who wants to be tattooed, make sure their doctor has signed off on it before starting.

Tattoos look good on everyone, regardless of age. The idea that there’s such a thing as being too old to get tattoos, or that tattoos are a young person’s game, is archaic and outdated, and needs to be squashed. Many people don’t decide that they want tattoos until later in life, when they don’t have to worry about corporate concerns or their careers possibly being affected, when they finally have an idea that they’d want tattooed, or they simply don’t give any fu*ks anymore what anyone might think. Whatever the reason is for waiting, it’s never too late to get tattooed.