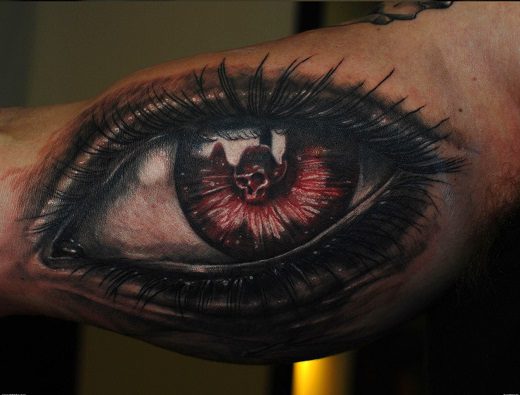 Why Eyes Are Such a Popular Motif for Tattoos?

Eyes are much more than the window to the soul, and depending on the details of the eye design you’re looking, it could hold a very specific connotation. Eye tattoos are one of the most popular design choices out there, and why is that? We looked into some of the symbolism behind the icon of an eye to see if we could determine what the wide appeal is behind this tattoo design. Turns out, there’s a lot more to it than you might think.

Eye tattoo designs hold a lot of different meanings which vary depending on the color and details of the way an eye is designed. They can, for one, representthings like clairvoyance, omniscience, intelligence, vigilance, moral conscience, and truth. In most western cultures, being able to look someone in the eye is associated with honesty, so covering the eye in any way indicates a kind of mystery or lack of truth. In other cultures, hiding the eyes can be a sign of respect or modesty, where the ability to clearly see one’s eyes indicates judgement or authority.

From a psychological standpoint, according to Carl Jung, the eyes are the crux of a person’s identity and soul; it’s the place where love begins. By this logic, if you can see into someone’s eyes, you can see who they truly are, and fall in love from that point. On the other hand, if what you see is untrustworthy or seemingly evil, then something more akin to hate or dislike is bound to be born. Either way, psychologically, you can’t truly know someone until you’ve looked them in the eye.

Each eye color symbolizes a different meaning. Blue eyes, for example, are a sign of innocence and love, while green eyes indicate rarity, jealousy, and signs of distrust. Red eyes, not surprisingly, signify fury or a demonic meaning. The number of eyes incorporated into a design further alters the meaning of the image itself. A single eye can represent the divine or omniscience (think the all-seeing eye), or inferiority of some kind. Two eyes, which is what most of us are accustomed to, indicates a normality of spirit and physicality, while three eyes is associated with a superhuman entity, whether that meaning is positive or negative largely depends on the context of the rest of the design it’s incorporated into. More than three eyes in a design can represent darkness and stars like that in the cosmos.

Eye tattoos can be done in practically any style with many variations in specifics of design. You could go with a Traditional design, either with color or without, depending on what meaning you want your tattoo to have. The top tattoo style choice for eye tattoos tends to be realism or hyper-realism so the artist can fully capture the complex details within the iris and sometimes add additional details that are reflected in the eye. Aside from tattoo style options, you can go with a range of design types, like that an all-seeing eye, an eye that reflects an image, an eye on its own, or a crying eye. Consider what meaning, if any, that you want the tattoo to have when you’re coming with the specifics of what you want included, so that you can adjust the design to incorporate certain colors and numbers of eyes to accurately reflect the symbolism you’re hoping to achieve.

It’s true that the eyes are the window to the soul, but there’s clearly a lot more to it than that. Eye tattoos can represent anything from truth and honesty, to the divine and inhuman, to omniscience and evil. Depending on what meaning you want your eye tattoo to symbolize, you need to consider more than just the design and how it looks – you need to think of how many eyes, what color, and in what context you want to use them to ensure that your meaning comes across as intended.