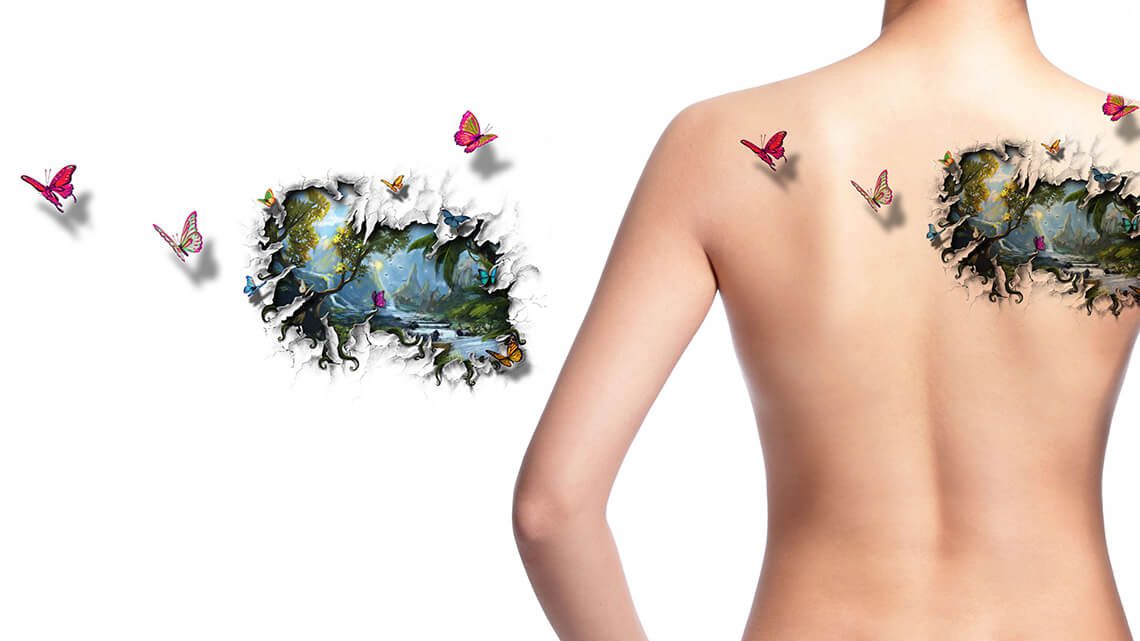 As one of the most beautiful creatures in the animal kingdom, the butterfly is a popular choice for tattoos. There are a variety of possible meanings that the tattoo wearer can associate with their butterfly tattoo.

One of the most common butterfly tattoo meanings is that of freedom, as butterflies are a flying insect with prominent wings. As it allows the bearer to move and travel freely, flight has long been associated with freedom and liberty, particularly because humans don’t have the ability themselves. And because butterflies begin their lives as an earthbound caterpillar, later on breaking free and developing the ability to fly, they are also often associated with hope.

Another strong association with the butterfly is the meaning of rebirth, resurrection, change, and metamorphosis. After all, the butterfly is one of the only creatures that begins its life as one thing and transforms completely into something else, often considered to be even more beautiful and perfect than before.

Butterflies can also be associated with the concept of the butterfly effect, which is the theory that one small event, like the flap of a butterfly’s wings, can, through a series of cause and effect, ultimately lead to a major change in the world, such as a tornado. In this way, a butterfly tattoo can represent power, the randomness of life, and the importance of one’s actions, no matter how insignificant they may seem.

The species or design of the butterfly tattoo can also impact its meaning. The Monarch butterfly is a classic symbol of royalty. In Mexico, they’re also believed to be a sign of souls returning for the Day of the Dead. In contrast, a Japanese butterfly is a symbol of marriage that commemorates anniversaries and weddings and a Celtic butterfly has come to symbolize the afterlife, transformation, and creation, as in Irish folklore, butterflies were symbols of the human soul.

Butterflies are one of the most beautiful things found in nature, making them look great in nearly any tattoo style. Here are just a few that are particularly fitting for this design.

With its solid lines and eye-catching colors, American traditional, also known as old-school, is a great tattoo style for butterflies.

Known for bringing out the color, magic, and natural beauty of its subject, watercolor tattoos pair quite nicely with the butterfly tattoo design.

If you’re interested in making your butterfly tattoo into a sleeve or want to create an effect as though an actual butterfly came and landed on you, a realistic tattoo style is the perfect choice for you.

Butterfly tattoos can look fantastic on any body part, but they’re especially cool when the placement can make it look like the butterfly just landed on your body, which is one reason why the shoulder is a very popular location for butterfly tattoos.

Other common choices for butterfly tattoo placement on the body include:

If you like to get multiple tattoos close to each other, design complex tattoos with multiple elements, or want your butterfly tattoo to fill up a large part of your body, you may be looking for ideas for other designs to combine with your butterfly tattoo. Here are a few options that work well for inspiration.

A skull typically represents mortality, and a butterfly represents new life. Together, these tattoo designs are symbolic of the circle of life and the ties between life and death.

Paired with a rose, the butterfly is a symbol of love. In Greek, the word for butterfly is ‘psyche,’ which is also the name for the god of love.

Generally speaking, butterflies pair quite well with natural imagery, especially flowers, as these are two of the most delicate and beautiful tattoos that people (especially women) like to get – and butterflies are often found fluttering near flowers.

a blue butterfly tattoo design is typically a sign of good luck.

as a cocoon emerges into a butterfly, it flaunts large, colourful wings. As such, butterfly wings have come to represent transformation and metamorphosis.

paired with a rose, the butterfly is a symbol of love. In Greek, the word for butterfly is ‘psyche,’ which is also the name for the god of love.

In Irish folklore, butterflies were symbols of the human soul. Celtic butterflies have therefore come to symbolize afterlife, transformation, and creation.

this unique butterfly is a symbol of marriage which commemorates anniversaries and weddings.

the Monarch butterfly is a classic symbol of royalty. In Mexico, they’re also believed to be a sign of souls returning for the Day of the Dead.

a skull typically represents mortality, and a butterfly represents new life. Together, these tattoo designs are symbolic of the circle of life and the ties between life and death.

in the context of Christianity, the white butterfly represents salvation. It’s also a symbol of purity.

It’s rare that we see things in nature that are as eye-catching as butterflies are. Each kind has its own allure, and each one has a unique meaning depending on its cultural background. Getting a butterfly tattoo is a fantastic way to add a bit of extra beauty and meaning into your life and onto your body.