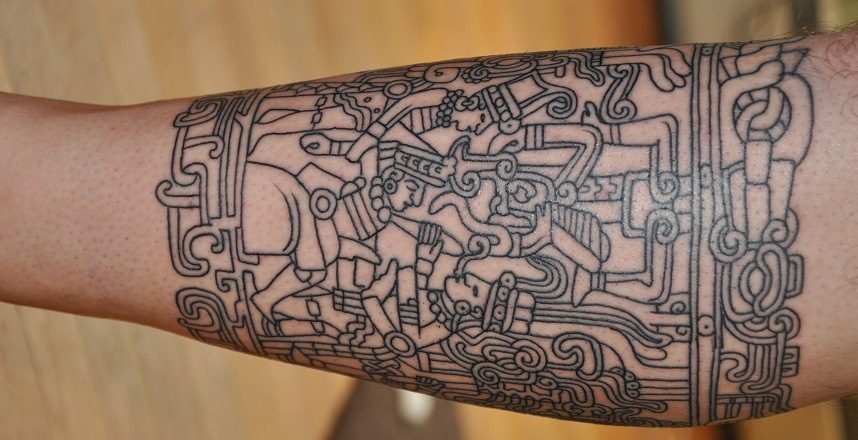 As one of the only ancient civilizations that created its own writing system, the Mayans were one of the most forward-thinking peoples in history. Aside from their many artistic innovations, they were known for their belief in the mystical, referring to an ‘underworld’ in their art and language. Below, we’ve assembled a Mayan tattoo dictionary, which elaborates on the meaning behind each one of these mysterious designs.

known in their language as the ‘zots,’ the bat was considered the guardian of the Mayan underworld. As a tattoo design, it represents both the light and dark qualities of humanity.

called the ‘tzolk’in,’ the 260-day Mesoamerican calendar is a unique creation of the Mayans, a symbol of their innovations as a pre-historic culture. Tattoos of these special calendars are a tribute to Mayan culture.

the eagle was a creature the Mayans believed paved the way for higher existence. As a tattoo design, the eagle symbolizes wisdom.

in the Mayan civilization, the Earth is synonymous with nature and growth.

an intricate circle symbol meaning ‘the One God,’ Hunab Ku is a Mayan symbol that represents peace, universal unity, and balance.

this majestic animal represents the relationship between man and earth. It also symbolizes the underworld, life, and fertility as a tattoo design.

depicted as a snake or a dragon chasing its own tail in a ring shape, the Ouroboros represents regeneration and rebirth.

this South American creature is a symbol of agility, mystery, and potency in Mayan culture.

considered a god by the Mayans, the sun is one the most important features of Mayan society.

Mayan art symbols are some of the longest standing, and their culture is renowned for its exceptional creativity. Even today, people feel connected to motifs apparent in Mayan culture, making Mayan tattoo designs a popular choice amongst tattoo enthusiasts.