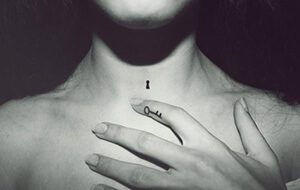 Minimalist tattoos are a growing trend, using crisp black lines, negative space, and sparse colour palettes to convey a design that’s clean and simple. These designs can be expansive or small, but the tattoo itself usually has precise, single lines that create a concise overall look. For those who appreciate elegant, sleek tattoos, minimalist designs make an excellent choice. Browse through our some of the most popular minimalist tattoos designs, and see which symbols speak to you!

a simple contour drawing of a deer’s antlers. Large antlers bestow a deer with sexual prowess and, therefore, stand as a symbol of pride, nobility, and virility.

an arrow design may have multiple meanings, one of which is the courage to move forward. (Psssst: We found so many arrow tattoo meanings we’ve given them their own post)

a miniature black heart usually honors a sad loss, to show grief or mark the end of a relationship.

This symbol, which signifies equal love, is in support of the LGBTQ community. Created in 1995 for the Human Rights Campaign, this design usually appears in blue and yellow or in pink and red, in support of same-sex marriage.

represented by an ‘8’ on its side, infinity symbols represent the mathematical principle of infinity. This symbol stands for limitless possibilities, and can also represent rebirth or reincarnation.

this symbol has a variety of meanings associated with it, representing a number of special trinities. The triangle with its point upward represents femininity and masculinity, when it’s pointed downward.

one of the most outstanding constellations, this design is named after Orion, a mythological Greek hunter. The minimalist version of this design is usually represented by a series of linearly interconnected dots.

these ancient letters are used to represent important dates in one’s personal life, such as a birthday or an anniversary.

this small bird design is symbolic of health, loyalty, and safe travels. The minimalist version of this design is often portrayed as a silhouette of the swallow, outlining its general contours.

based on the line graph information on an electrocardiogram, this simple linear design reflects vitality and symbolizes life.

waves cresting can represent new beginnings or it can symbolize a special attachment one has to water.

represented by a simple black ring around the ring finger. This tattoo might serve as an alternative to a traditional wedding ring, offering a symbol of commitment that is less costly and doesn’t risk being lost. Couples have taken creative liberties with the design, adding their significant other’s name or curving lines.

These are just a few of the designs that have become popular minimalist tattoos.