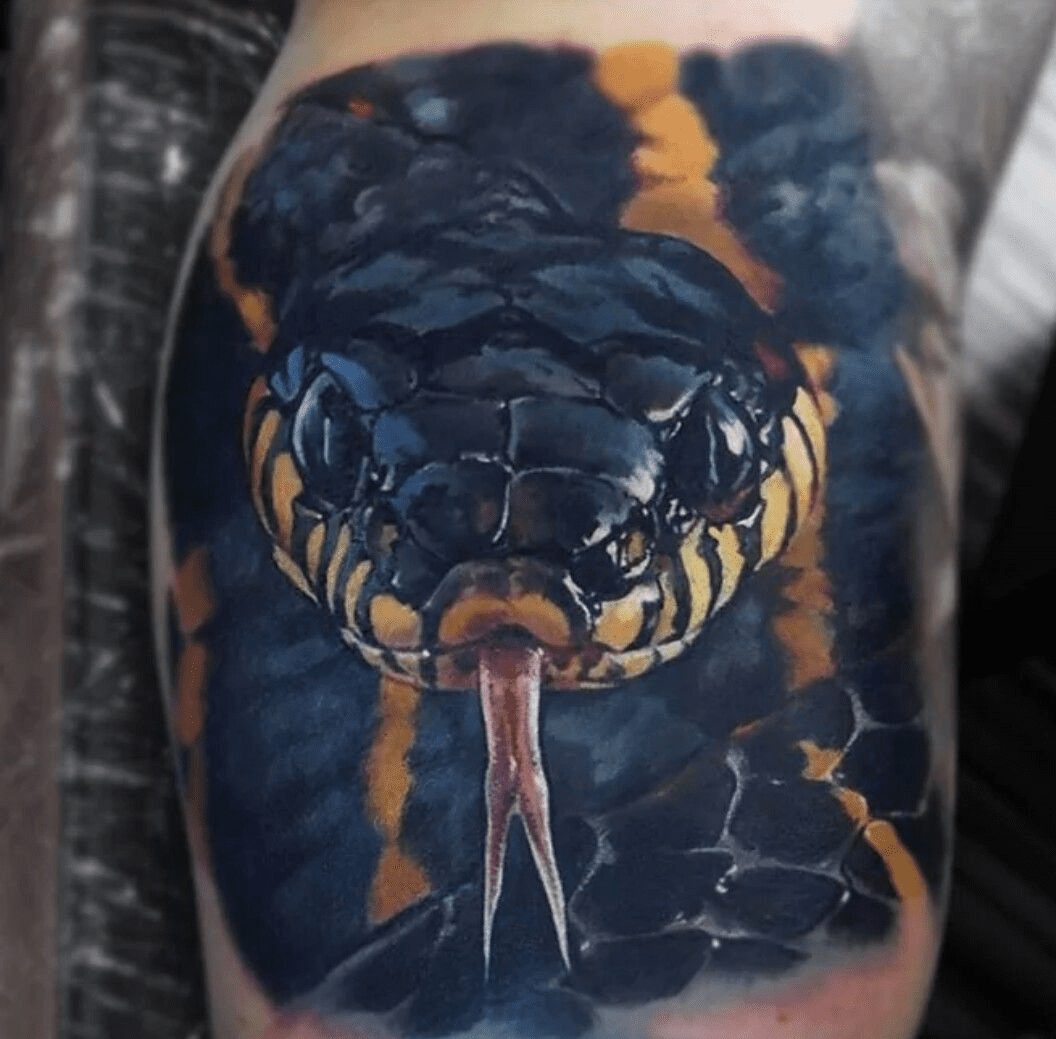 As ancient reptiles, snakes have fascinated and frightened mankind for centuries. They’ve stood as strong symbols in thousands of stories from modern fiction to religious scripture. As a result, people have been choosing to get tattoos of snakes since the dawn of tattooing. In this article, we’ll go over the history of snake imagery in tattooing, explain the meaning behind several different versions of snake tattoo designs, as well as offer an overview of popular snake tattoo styles and locations. So read on and be charmed by the snake’s mysterious allure!

The History of Snake Tattoos

While anecdotal evidence suggests that snake tattoos have been around for at least as long as most people alive today (who pay attention to tattoos, anyway) can remember, little research has been done on the more distant history of snake tattoos. However, there are some references in historical documents and myths that suggest that people have been getting snake tattoos at least as early as the dawn of the Common Era.

Pagan druids, members of the high-ranking Celtic learned class who were active at least as early as the 3rd century BCE and were suppressed during Roman rule around 14–37 CE, are reported to have had large snake tattoos on their arms. According to Dwight Longenecker of the Patheos Catholic channel, “The pagan druids featured serpents in their worship and were tattooed with serpents.”

Other early bearers of the snake tattoo include southern Native Americans. As French admiral Jean-Francois Bertet de la Clue Sabran wrote in his journal, they had “their skins covered with figures of snakes which they [made] with the point of a needle.”

De la Clue Sabran also mentioned that Jean-Baptiste Le Moyne, Sieur de Bienville, a French colonial administrator in New France and an early governor of French Louisiana, also “[had] all of his body covered in this way.” This account was corroborated by Italian-born soldier and explorer Henri “Iron Hand” de Tonti, who said de Bienville, “had a snake which passed around his body and whose tongue pointed toward an extremity which I will leave you to guess.”

As we’ve alluded to already, in fields as varied as religion, mythology, lore, and culture, the snake has traditionally held a place of power and significant meaning, both positive and negative. Often portrayed as a symbol of evil, the snake has also been depicted as having good and virtuous associations, too.

There are several qualities in snakes that have allowed them to hold a place of such fascination in the human cultural consciousness for so long. First, there is the fact that many humans experience a fear of snakes, also called ophidiophobia. Indeed, some snakes such as the cobra or rattlesnake can cause harm to humans, leading people to associate snakes with danger, risk, power, and strength.

Another part of the snake’s mythical appeal is its ability to shed its skin, which has often been associated with rebirth, change, transformation, new beginnings, and even healing and immortality. The caduceus, or the staff of Hermes, a traditional symbol of two snakes winding around a staff, is often used as a symbol of medicine, especially in the United States.

The ancient Egyptian ouroboros symbol of a snake biting its own tail is thought to represent renewal, reincarnation, and the continuous cycle of life and death, as well as even the circle of life, the cycles of the universe, and the changing seasons. Another ancient Egyptian symbol involving the snake is the uraeus or a reared cobra. Often worn by Pharaohs as a head ornament, the uraeus came to be associated with power and the protective goddess Wadjet.

Of course, there is also the association of the biblical story of Adam and Eve, which sees the serpent as a symbol of temptation, sin, and evil. As the story goes, it was the snake that convinced Eve to take a bite of the forbidden fruit, leading to the origin of sin and the ousting of mankind from the Garden of Eden.

In some Native American and African cultures, the rattlesnake was revered as sacred for its connection to rain and lightning, while in various other cultures, the snake has also been viewed as a symbol of fertility and creative life force, potentially because of its phallic shape. As such, there is justification for the popularity both of snake tattoos for men and snake tattoos for women.

With this large variety of possible meanings, snake tattoos can also come in many different tattooing styles.

One great style for snake tattoos is the American traditional or old school tattooing style, as the snake is a classic traditional tattoo motif and looks great rendered in bold lines, both in black and white and in color.

Snake in a Japanese Style

Realism is a good option for your snake tattoo if you want to lean into the snake’s fearsome, powerful nature.

On the other hand, if you like the snake’s more positive associations such as rebirth or healing, you may want to choose a more delicate tattooing style for your snake tattoo, such as minimalistic.

Finally, if you want your snake tattoo to carry more ancient and traditional meaning like the Native American association with nature and weather, you may want to choose a tribal tattoo style. 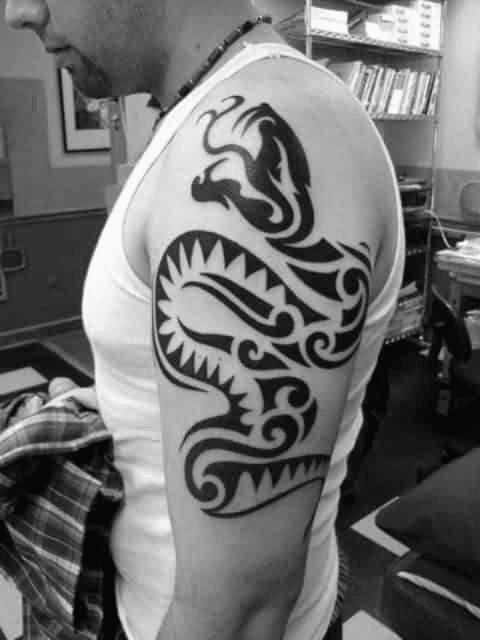 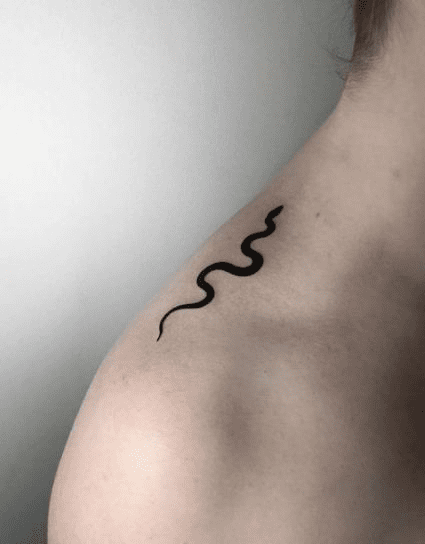 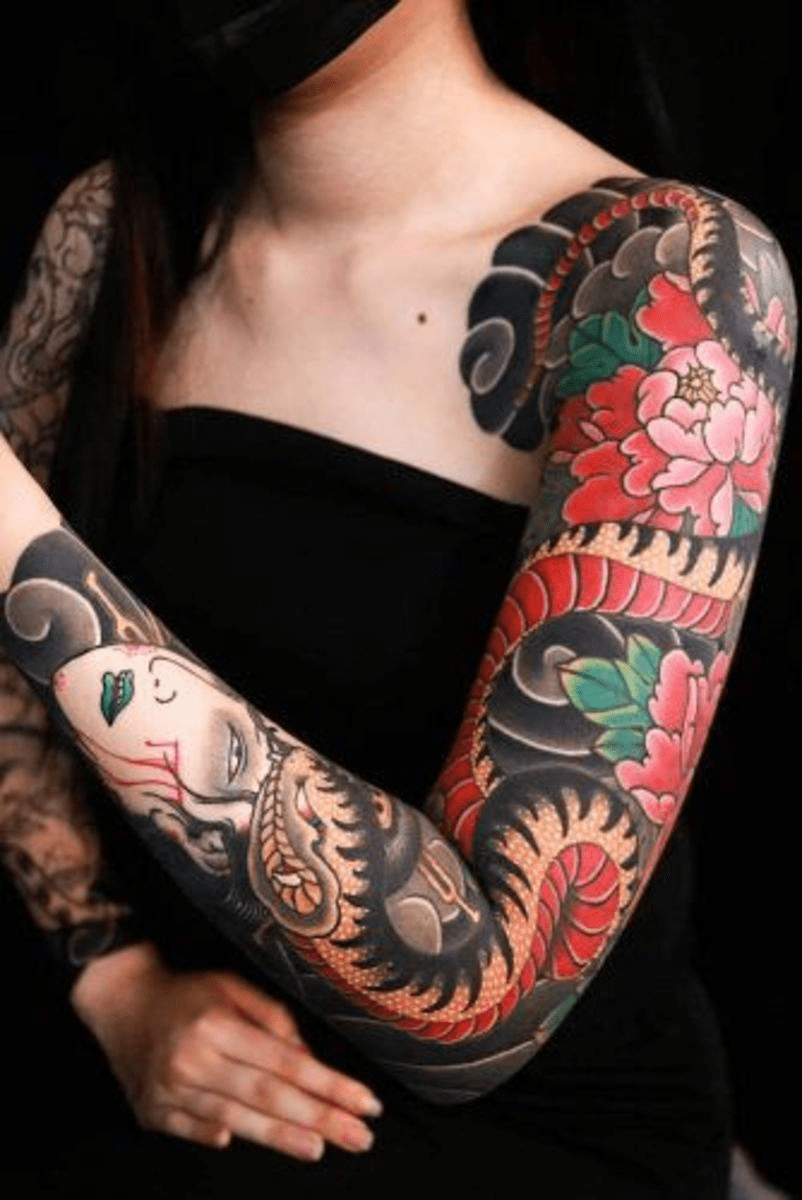 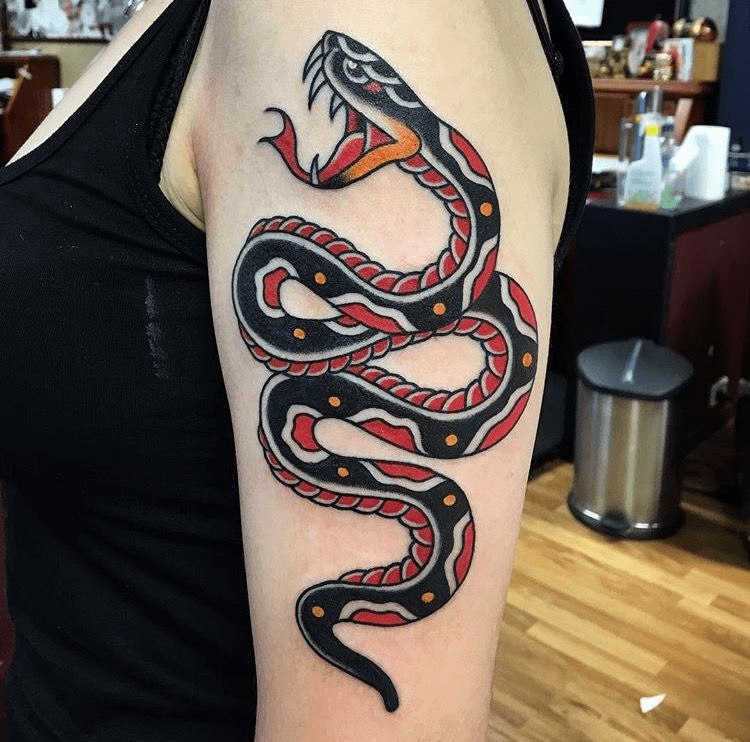 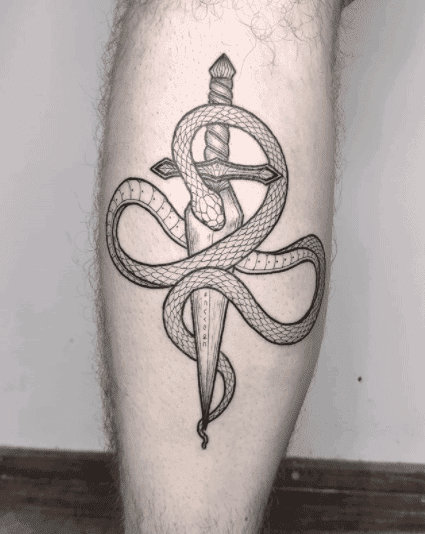 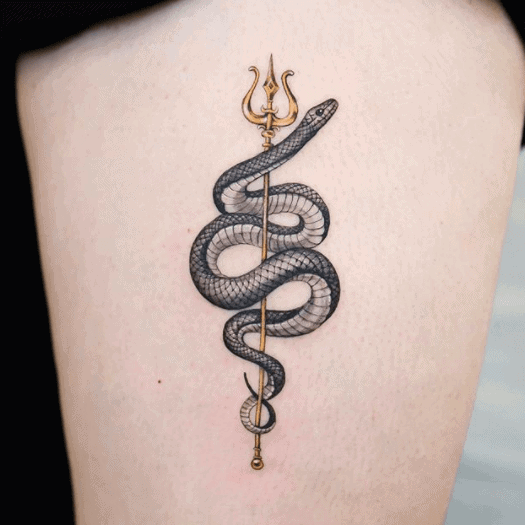 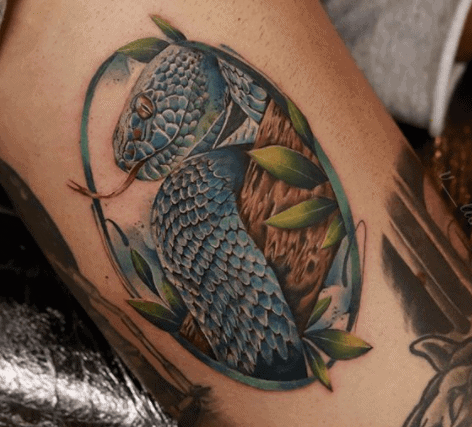 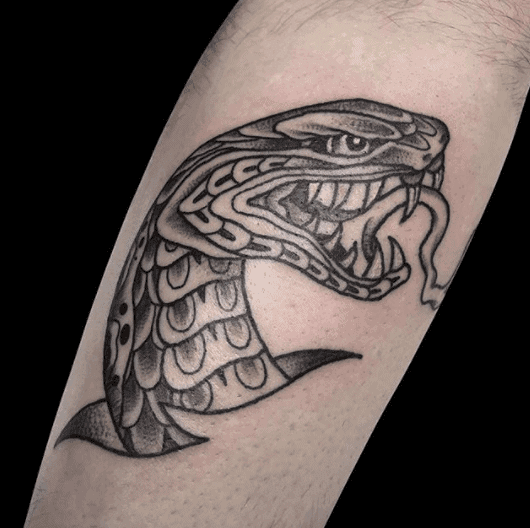 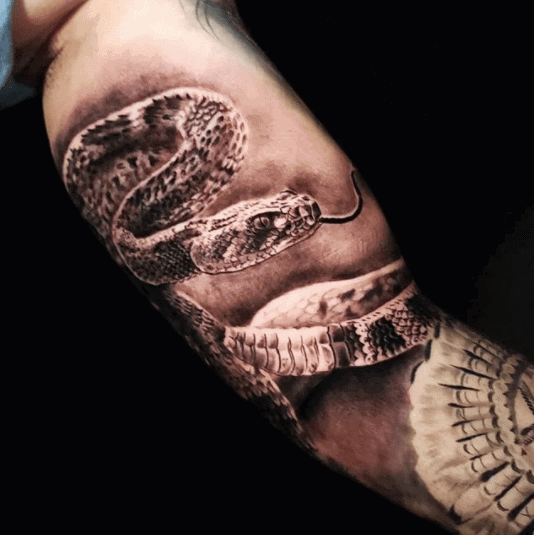 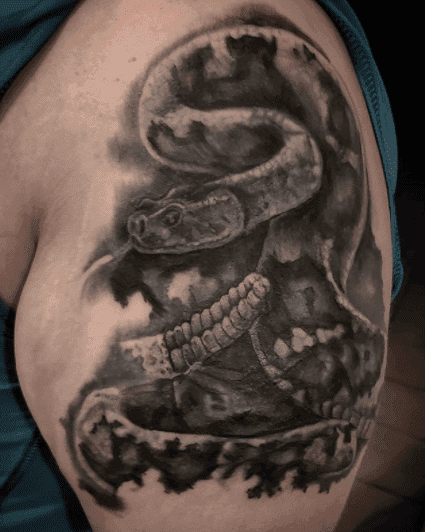 One of the best things about the snake tattoo is that it can work so well on both men and women. Traditionally, men are more interested in getting snake tattoos in locations such as the:

For women, snake tattoos do a great job at following the smooth and curvy contours of the body, particularly beautiful when they are used to accentuate such body parts as the:

Looking for your own snake tattoo design? Our team of designers is ready to help bring your dream tattoo to life.

What Works Well with Snake Tattoos?

If you want to get a bit more of a complex snake tattoo or one that fills up more space on your body, like a sleeve, you may want to pair your snake tattoo with another design. Here are just a few more symbols and images that complement snake imagery well.

Together, the rose and snake tattoo designs are the ultimate symbol of temptation. They also represent a loss of innocence and beauty.

A strong symbol of death and decay, the skull and snake tattoo design is a reminder of man’s mortality.

Together, the dragon and snake are a symbol of balance. While dragons represent the wild and passionate, the snake represents the calm and cunning side of nature.

Getting a snake and apple tattoo together recalls imagery from the Adam and Eve story, suggesting associations of the sinful nature of man and the fall from grace.

As mentioned above, the caduceus symbol of two snakes winding around an often winged staff is known to be associated with medicine and healing.

For those who want to make reference to the Native American and African associations of snakes with stormy weather, getting a snake and a lightning bolt can be a powerful way to symbolize the power of nature.

Snakes with other serene natural imagery such as flowers can come to symbolize the gentler and more positive meanings of the snake symbol such as rebirth, change, transformation, fertility, and grace.

These serpents are a powerful force of nature, symbolizing man’s primal desires and instincts as well as an obstacle to our spirituality. While some snake tattoo designs stand for mortality and evil temptation, others represent noble principles and the power of resilience.