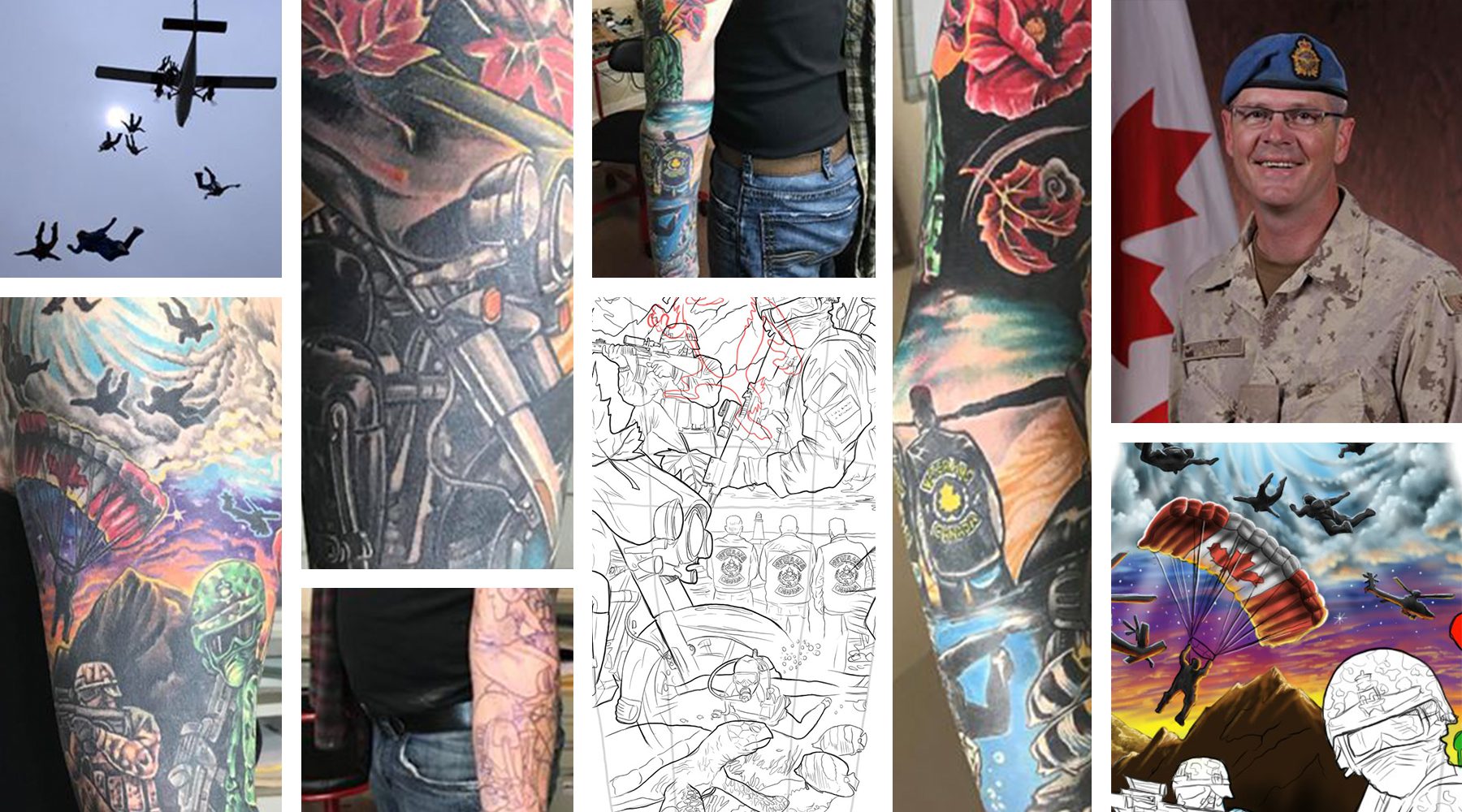 An Inside Look at the Process: Marcus’ Ink

The thought of designing your ideal tattoo can be daunting: where do you start? Where do you go to get it done? How do you come up with a design? When you find the right artist, though, the results can be something better than you dreamed of in the beginning. We wanted to get an in-depth look at the Custom Tattoo Design process from a customer’s perspective, from start to finish, so we contacted CTD customer Marcus G. We asked him to take us through the entire process, starting from his initial design request, all the way to him getting it inked. Read on to see what Marcus had to say.

Say you want a tattoo, but you don’t know exactly what you want the design to be yet. You have some kind of idea what you want it to represent, but it’s not fully formed, so where do you start? By sending in your idea – we created Custom Tattoo Design to be a simple way to get your ideal tattoo design. All we need from you is a rough idea of what you’re looking for in terms of size, placement, and potential complexity, and our team can get started on creating your perfect tattoo. Once you submit your idea, our art director will match you with one of the many artists on our roster, based on the type of work you want and their specialty in terms of tattoo style. When you’re matched with your artist is when the magic really happens!

You and your artist will chat one-on-one through a custom built platform. This is where you two work together to create your unique, one of a kind design. Upload any images that you used for inspiration, tell them what feeling you want to get from your tattoo, and anything else that you want incorporated into your design, even if it’s just a small detail.

“My tattoo design…is a story about my life”. Marcus got into skydiving in 1994 after a drunken night with friends, “we watched Dropzone with Wesley Snipes”. The following day they took the literal plunge, “it changed my life”. From there, Marcus’ beloved hobby took a professional turn, “I was a civilian working with the British Army as a parachute rigger and coach for an adventure training skydive program”. His tattoo starts here, with the top of the image taken from a freefall he had done in 2008:

As we move down, one of the inspirations for me joining the military, The Skyhawks (the Canadian Forces Demonstration Parachute Team). This is the Parachute just below the shoulder. I was accepted to the team in 2015, but was injured and unable to proceed. This was also the end of skydiving for me, with a final jump count of 603. The sky behind the jumper is both a transition and symbol. You can see the stars in the sky, which are a symbol of my time in Space Operations, where I currently serve under United States Air Force Space Command.

The helicopters are symbolic of both the Air Force, and my time deployed to the Middle East, as is the soldier in the tan coloured combats. The two soldiers symbolize domestic operations (green), and foreign operations (brown/tan), of which I have served both. Surrounding the soldiers are maple leaves to represent my home in Canada, and red poppies to symbolize remembrance of the soldiers we have lost in conflict.

The three men in motorcycle vests is for brotherhood. This is from a photo of me and two of my good friends, when we took a motorcycle trip around the east coast of Canada, after my return from Kuwait, where I was part of Air Task Force Iraq in the fight against ISIS. The lighthouse in the background is Peggy’s Cove, one of the most recognized places in eastern Canada. Coming around the front of the arm, you have my Harley. This is my therapy. I find great peace when I am out on the road, and the brotherhood with other riders, especially my brothers in the military who ride, is very important in my life.

The last part of the sleeve is the motorcycle fading into a scuba scene. Scuba is the sport I took up to replace skydiving. It provides me hours of entertainment, and is an outlet for me to find peace around me.

When he was matched with Carmen as his artist, he gave her an idea of what he wanted the tattoo to represent, along with some photos to use as inspiration, “and she created this masterpiece”. Having complete say in how your design turns out is just one of the many benefits of going with a custom design.

There are a couple of options when looking into tattoo design ideas, and those are going custom or choosing a design from an artist’s flash sheet. There are pros and cons to both, but in the end, the only way to ensure that you get exactly what you want is to get a custom design. This also saves you the trouble of having to search for a flash design that matches what you have in mind, which is really almost impossible to do.

A custom tattoo design is especially ideal if you’re looking to get a tattoo that tells your personal story, or to commemorate something meaningful to you. There’s no way you can find that on flash sheet, that’s something you need to create with an artist.

Marcus has gone both routes in terms of flash versus custom tattoos, but when it came to this particular work of art, he wanted it to be wholly unique to him, “Two of my three tattoos were a cookie cutter design…or a pre-made piece of art. Only one was custom designed, and it was the one I was most proud of until now”.

His previous custom piece was designed largely by the artist, and Marcus found himself agreeing to the design, more than contributing input to it. This time around, he had full control in creating his tattoo, “Instead of sitting in a tattoo shop with the artist designing something that was in his ability, and guiding me towards something they wanted to do, this time I was working with an artist to truly design something that was all about me”.

From Start to Finish

Once you’ve given your artist all of your ideas and photos, they’ll take what you’ve told them and sketch up a first draft. From there, it’s totally up to you. If you want any changes made to that first draft, just let your artist know and they’ll make any adjustments you want. You can make an unlimited number of revisions to your design drafts – the #1 priority is that you’re completely satisfied with your final design. Once you approve the tattoo design, then you pay for the full design. At this point you own the design, and of the rights associated with it.

Marcus had initially only set out to get some design inspiration on the web when he came across CTD. He didn’t expect the wholly individualized experience that he got when he sent in his initial request:

I’ll admit, I was a little leery initially of giving an unknown company my [credit card] information to design a tattoo. I had very high standards for any design that was going on my skin. I had initially intended on just finding designs for inspiration, to get ideas. I saw that the company was Canadian… and as a Canadian, I figured I would give it a chance, but was fully ready to bail on the process because I didn’t think anyone could meet my expectations through an online format.

I started the process and was surprised how quickly the first person contacted me, and asked all the right questions. I was then told to wait for my artist to contact me. Carmen contacted me and introduced herself as my artist. The whole process was done through a private chat website between me and her. We discussed my design, and she requested the measurements of my arm. I provided them to her, and took photos of my arm with a sewing tape measure, so she knew exactly where (and how big) the old Taz tattoo was that was to be covered up.

After a few more Q&A’s, she sent me her first draft. It was rough, but it looked like everything I asked for. Now the tweaking of the design begins. Each time I sent her an idea, or a request for change, she listened and did exactly what was asked, and then sent me a new image with the changes. After 3 modifications, the colours were put in and the piece came alive. I then had some changes in the colours I wanted, and she made the adjustments, and sent me back another image.

I remember getting the final draft, looking at it and knowing immediately it was done. I knew I wanted that on my arm. Carmen had taken all of my thoughts, all the things I had catalogued in my brain over many years of thinking about what I wanted, and she put it onto this piece. She had created my personal masterpiece!

It didn’t take long for him realize that his vision was genuinely going to come to life, and that he was connected with the ideal match, “After the first draft, I knew I had been paired up with the right artist for my sleeve. As the process continued, she was very receptive to all my input and adjusted on the fly. I couldn’t be happier with her talent!” From here, all Marcus had to do was take the design to his tattoo artist and get it inked.

Marcus decided to take his final tattoo design to a friend he met through the military, tattoo artist Dave Duchene, “There isn’t anyone else I would want to do this piece”. Duchene’s reaction on Marcus bringing in a pre-designed piece? “I initially sent him a text with the image. His response was very simply a ‘Yes!’ He was extremely impressed with the design”.

Marcus was not only provided with a full color copy of the artwork, he was also given a colorless version so that Duchene could easily create the stencils needed directly from the outline of the piece. The simplicity was appreciated by both Duchene and Marcus, “This drastically reduced the workload for him, and got me in the chair faster”.

In total, Marcus’ tattoo took 8 sessions to complete, and approximately 40 hours altogether. “Every session we had, he would comment on the level of thought and detail that was put into the design process, from the transitions between the elements, to the reflections of the sunlight on the mountains”.

As far as how Marcus feels about the finished product? “I cannot express how happy I am with Custom Tattoo Design, from the initial contact, right through to the final finished product. I will never get another tattoo unless I use their service to design a custom piece”.

Submit your idea here to be matched with an artist and get started on your own custom tattoo design!